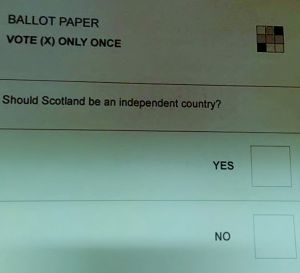 My final selling reflection on the momentus #indyref.

Yes, I did stay up through that night. Feeding my election night results programme addiction.

The Scotland Referendum. What an absolute victory for democracy.

During the small hours of 19 September there was a huge chunk of airtime to fill before the cascade of No votes were returned towards eventual glory.

One such time-filling feature looked at how many advantages the Yes campaign built into their chances.

Three aligned factors were considered by pundits across the board to be significant which have Sales implications. Two pro-Yes, one anti.

First, the Yes side got to set the question.

Should Scotland be an independent country?

There was much gnashing of teeth about whether the question should have been different. Yet the consensus is, if you get to set it, then you’re already at an advantage.

And so to when your prospect asks themselves their key question. When you’re not there. As the answers are about to be uttered around the water cooler, in a random meeting, at the Boardroom table.

Is it framed by you?

Then there was the binary nature of the answer. Yes or No. This swayed things No-wards.

All the talk of a halfway, stuck in the middle option (so called Devomax) was misguided. Binary is the only way to go. Have a third option in, and it surely will get the vote by default. To the real benefit of no-one. Least of all ‘decisiveness’ or ‘progress’.

Don’t give your prospects the chance to announce themselves as “half-pregnant”. What a gigantic waste of time that’d be…

And thirdly, another Yes edge came from them securing the ‘yes’ box. People like to be positive, surely? They chose a question that would give them the good old “yes we can” vibe.

They did not opt for ‘should Scotland stay in the UK?’, did they?

As then they’d become the No side. Urgh. Who wants to be on the negative team. A neghead. Argh!

Are you giving your prospect reason to embrace the hope? Build positive energy? Nod that head ever more up and down? Yes Yes Yes!

Success stems from setting the question from the outset.

Craft your question. Make it binary. Own the Yes.

Let all three infuse inside your prospect. Win that deal. Oh yes.