There’s a legislative dispute going on in America. Emblematic of the present-day polarisation that appears to have forgotten that it is the combination of not just competition but also then collaboration that underpins homo sapien progress.

Their partial government shutdown sees 800,000 public sector staff going unpaid. The reasons for this so complex, tangential and even opaque – or maybe even simple, quick and easy – I’m sure you have your own view. 🎶 Build the wall! Never build a wall! 🎵

One of the players often cited is “the deep state”. Any movement forwards may only be accepted should this murky force allow it. As Ronald Reagan gets quoted, “government is not the solution to our problem; government is the problem.”

It refers to the part of the organisation that aims to steer it, secretly, subversively, to maintain power under the surface. They are ingrained. Decisions may get made, but the actual truth lies in their implementation. Which may never happen, or morph in some unrecognisable way so as to render the initial idea fatally neglected.

This concept is not quite core group theory. As that ‘core’ can be well-known and arranged hierarchically. Although it does have useful similarities.

Does one exist client side? Is there one department, team, division more powerful and seek to wield that? is there a seemingly invisible hand on the wheel changing course after a decision appears to have been made at your last meeting’s end?

There’s another angle you can consider as well; the shadow organisation. Office politics writer Jo Miller re-terms organisational awareness with this chart; 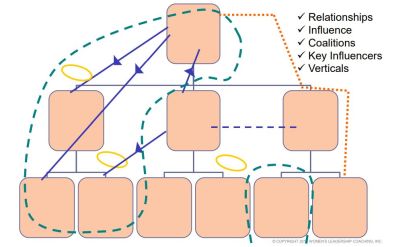 She calls this tactic positive political savvy. It’s another way to begin to plot how the published organogram is rarely fully representative of the real lines of communication, action or authority.

If you’re not mapping your prospects in such ways yet, you’ll be missing a vital trick.