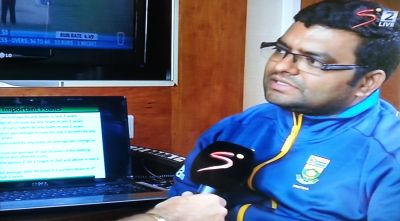 This is a pic taken of my telly showing, I learned Wednesday, an Indian chap affectionately called P-Dog.

I revelled in Wednesday’s latest South African cricket “choke”. Especially as I was watching from their Cape. Mauled by the alarmingly predictable and plodding, yet for once also surprising and speedy, England in the big semi-final back in London.

I ensured I could work away in front of the telly for the one-day 50-over match. And with the Proteas slain to 76 for 8 within 90 minutes it was a most pleasurable morning.

Before the jollity of the game itself, the local broadcaster triumphantly preceded the live feed with all four of their pundits safely predicting an SA win. Beautiful. As well as showing the real purpose for this blog, a package highlighting the unsung heroes from the back-office.

Prasanna Agoram is the softly spoken intellect behind the numbers. He’s nicknamed P-Dog by the team. His job is to analyse every stat. In the most minutest of detail.

Obvious examples of this are found with plans for batsmen. As backed up by the video of his IPL dismissals, the destroyer that is Chris Gayle can be vulnerable early to a ball just a touch too full to cut. And as shown by the video replay collection he does so, often to a grateful gully or point. And that’s how the Saffers got him out in this tourney too. 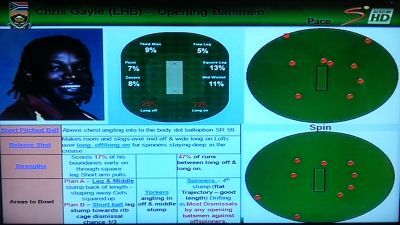 I love stats like “47% of runs between long off and long on”. That’s like half his accumulation in around a quarter of the hitting zone. And Plan A & Plan B for how most likely to snag his wicket. (Here’s the summary Pakistani danger batsman, Kamran Akmal too:) 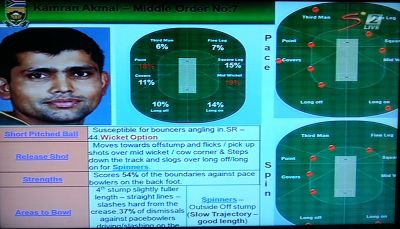 These summaries are terrific. The obvious parallel is to imagine you had something similar for every time you beat a particular competitor. Yet I feel that there’s a less negative comparison in Sales. After all, you never truly prosper when obsessing about your opposition’s performance.

I’ve had chief execs tell me proudly how well they know their “sweet-spot”. Yet they never do. Such a hot target bullseye to them is more about the mere techs and specs that they invariably trot out to me.

Instead, it is really more rather about personalities, deal shape, access, collaboration, pain thresholds. Not about things like speeds, user numbers, volumes, bells and whistles.

This slide of P-Dog’s leads the way. 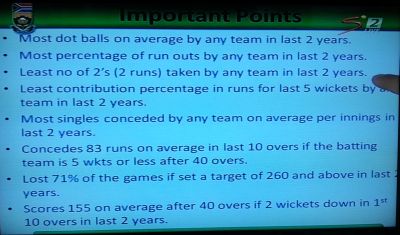 It reveals the overall plan for how you’re most likely to beat Pakistan. Even down to how many runs you can restrict them to, thereby conversely knowing a good score to set.

This kind of analysis I feel is essential to any sales outfit. Yet that so few do it is criminal. (I’ve only encountered a couple in the past twenty years that have even started the journey and whaddaya know, their performance was then considered world class).

Of course, I am not suggesting that there is some magical cure-all in the numbers. Just like for S Africa vs England, you still need to execute.

Nor am I saying that you must grab the uber-nerd who, like 007’s new Q, can cause more damage in his pyjamas with a laptop than the top rep in a year of presentations.

What I am saying though, is that if you know where you are more likely to succeed and how – with real firm data based evidence to support this – then you are way more likely to prevail.

I know that genuine stats are so difficult to nail down. Subjectivity can be rife in assessing the merits of a campaign and crm is prone to serve up utter rubbish on this too. Yet a picture will emerge with the right thinking.

P-Dog was said to be fantastic at spotting trends that help make a difference. Who’s spotting them for you?

As a first footnote, the assembled brains-trust in the studio were keen to point out that they were never a slave to the figures. They liked them to aid decision making when under pressure. And for that to be most effective, they’d take one key point to remember that, when the flak was flying, they could cling to for an extra, winning, idea.

And second, what about the design of the slides! Apart from the “wagon-wheel” run scoring area charts, the rest is way too texty, don’t you think. And why do people still insist on plastering their logo with a header line, taking up unnecessary screen real-estate?