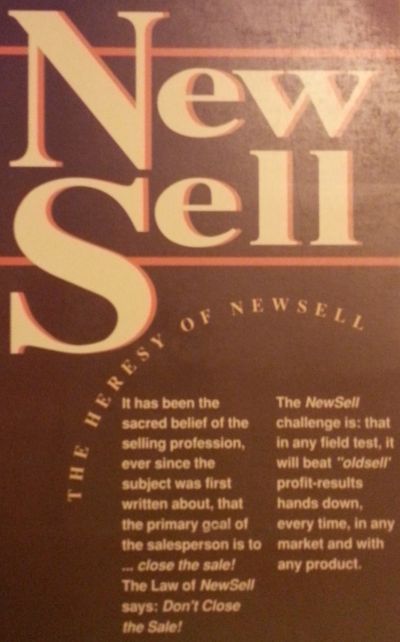 There’s a lot not to like about his quarter-century old text. The religious references, wallowing in cosmic mysticism, evoking the much derided lateral thinking sect and its flagstone success example being suspiciously more Marketing than Sales.

Yet there is one single concept at its heart which is indeed worth building upon all these years later.

To begin with, you can’t help but applaud an opening gambit that states “the heresy of newsell is ‘don’t close that sale’!” There was something wrong with Sales. Now as then. Salespeople universally held in poor professional regard, self-centred untrusted bullies. Why ‘push’ if you could perhaps ‘pull’?

One great flaw of the book is that it fails to specifically address how to lead a reticent, stubborn, obstinate prospect to embrace said glory of BVS.

There’s secondary promise from a “strategy switch”. I did like this as a construct, yet the syntax feels all wrong and the mooted 250 ‘moves’ (from an apparent personal trove of 800) are a bizarre embarrassment of just the kind of ‘old selling’ so berated upfront. This idea needs re-imagining as a sales tool to have legs.

Yet this is on absolutely the right pathway. As confirmed by the spot-on observations on how vital process thinking truly is. And how lovely to see the good-old Gandhi quote in this regards;

Winning asides on occasion appear. The issue is that they are muddled among too many irrelevant and inaccurate steers.

Still, to stay positive, I’ll wrap up with five such mini-morsels that will also help lift you above the majority:

At the very least, the key sales takeaway from this work is that when selling ‘change’, you must replace the imposition of the current place with the attraction of a better one.