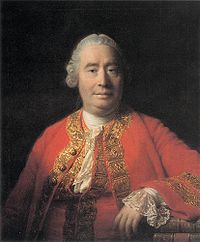 At the start of my second ever day of sales training, the old sage conducting affairs wrote up on a flip chart the following teaser;

the decision to buy is ____% emotional

and it was open forum to fill in the blank with a number. One muppet tried to be clever by stating that ‘the decision not to buy can be 0% un-emotional’. Yet a universal selling truth emerged. The desired answer was “100” per cent.

Every decision to buy is 100% emotional. If that’s true, then why do we bother with carefully crafted tomes summing up all we can muster about the decision by way of Proposals, presentations and pitches? Why do we create ready reckoners formed from reams of data that show the before and after cases light up once our magic dust is sprinkled? Why do we get so hung up on documenting buying criteria that stipulates the uniquely required speeds, colours and sizes?

I mention this as last week I listened to a Radio 4 discussion on the impact of an Eighteenth Century Scottish philosopher, David Hume. He wrote only a century after Galileo, and only fifty years after Newton. Yet any man credited as an influence by Darwin, Adam Smith and Einstein was, I thought, worthy of learning more about.

His first major work, from his early twenties no less, was The Treatise of Human Nature. He took reason and passion, looked at their nature and how they relate to each other.

His conclusions were radical. He dismissed the prevailing thinking, from luminaries like Aristotle and Plato that rationality governed passion, to argue that reason is subservient to passion (or desire).

He even said that a lot of reason is based on guesswork anyway.

What a true word in the light of many a major decision process I’ve witnessed.

His feeling was that predicting such things based on “induction” (a inference or perception of what you can only think might happen) isn’t quite the ticket. As you can never truly know what will happen.

So, even though his later writings apparently became more even-handed, desire is the driver.

Passion is what you want. Desire is how you get there. Where do you desire to go, and what will cause that to happen?

These are constructs that could be taken straight out of any solution bid debrief.

You’d do well to bear them in mind as part of your sales analysis.

When I ask solution salespeople why their customers buy from them, they typically stall at a pointer that talks of how they like doing business with them, their way. That’s pretty much as 100% emotional as you can get. Perhaps it’s time you codified this ‘ingredient-x’ for your own sales process.