Oh dear. Our Richard’s at it again. The ten year anniversary of his first CNN International nightly show saw him back where it all started. WEF at Davos. As I’ve blogged many times, I do enjoy his reports from the annual Alpine Elite Retreat.

It exposes so many of the personalities interviewed as despicable. Is not completely soaked in the anti-Right stain of the rest of the network’s output. And the host’s enthusiasm makes him still a solitary breath of fresh air in their schedules.

But there is a but. How can I not love the deployment down the years of his flipcharting? Well. The issue is that each year his chosen topics slide ever more negative.

As the UBS Bank chair told him at the end of the first day proper, ‘everyone is too pessimistic here’. Perhaps knowingly suggesting Mr Quest buck himself up on the quiet as well. His midweek shows did show a slight rebalancing, yet pondering this issue sadly only in passing comments.

Twelve months ago we had the Fracture Board. The time before, the Scale of Uncertainty. Despite global growth set to remain at a healthy, steady 3½%, we today revisit 2016’s Worry Wall, with this week’s World of Worries.

The idea is to present each ‘luminary’ with a choice of four different coloured marker pens. This exchange also contrived to hopefully prompt a loose, revealing word from the protagonist. “Is ‘hope’ green or blue?” A self-absorbent lot these ‘leaders’, most choose a colour in keeping with their brand hue.

Then they scrawl a pair of words that sum up what they worry about for the coming year. The plan being to create an insightful ‘world cloud’. 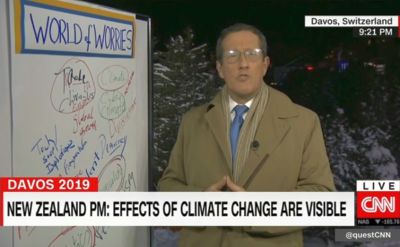 Whatever the eye-rolls the elite elicit from us, the trampled upon viewer, this as an exercise is an essential part of any solution sale bid. Imagine if you had a page with what every player prospect-side considered the essential, stand-out component a bid must have to be bought?

Back to the slopes. As the panto progressed, encouragement for circling or underlining existing terms was given, yet rarely it seems followed. I was waiting for someone to break ranks and draw a line to indicate a new section with a big huge ‘+’ sign, then write an opportunity or hope. In previous years many an ego couldn’t resist reshaping the frame, but this year, although Mr UBS selected ‘pessimism’, it wasn’t until the page was almost full half-way through the week that Anand Mihandra said ‘you must change your title’ and gushed reasons to be optimistic.

Still, let’s start with the pens. Here, the standard four colours from any cheap supplier of such got presented. When I go out on the road, for the past two decades, I’ve had my own markers in my bag. The number of times you rock up and the client only has dried out no longer working ones is incredible. Not only that, but there may only be one colour. A proper artist (that’s you) requires a palette. The farther away from the standard colour set you get the better too. 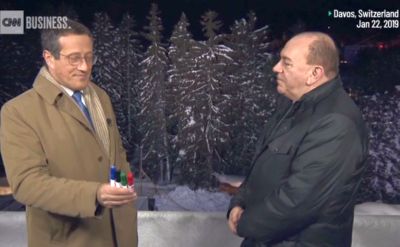 And why not take a leaf out of their book too. Offer a choice of colours to your prospect when you ask them to write on the board, and try to ask why they chose a particular colour. You never know what nugget you might pick up about them.

I did for a fleeting thought wonder if you could carry around a folded flipchart sheet at your prospects. Ask each person you meet to write on their ‘top two’ items they’re looking for in a solution. But then, this may give your enemies too much information and ideas. You must be collecting such intel anyway. So better to do in isolation and compare later. A possible exception may be a specific workshop. Then you’d perhaps also uncover political stances, allies and the contrarians. Does anybody want to be seen as ‘worrying too much’?

As has happened before, What to do when you run out of capacity…? 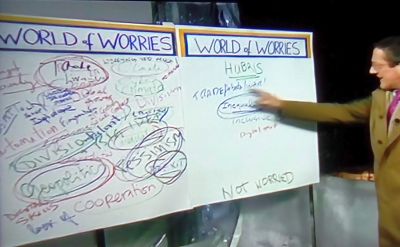 And lastly, Richard likes to remind us that for five years now the World Economic forum has ran the theme of automation killing jobs and how leaders must prepare for this imminent monumental disruption. Nothing seems to be moving on this though. Hardly any talk, even less action. So this year, Sidney Snowbot reminds us what lies in store… 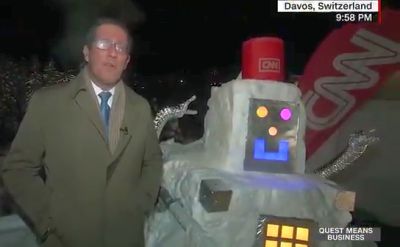