Many years ago I had the pleasure of meeting the ever-genial leader inside international transporter Keuhne & Nagel’s sales operation. I’d like to say Bob Ashkettle was very much old school. Strip out the Luddite connotation, mind. Big on relationship and big on new ideas, a popular and successful chap indeed.

As Concorde interrupted one of our meetings, booming overhead, people clamouring under desks, with typical ebullience, Bob excitedly showed me his favourite piece of sales process. It was called the Sales Platform.

I touched on this in a post five years ago in the context of Stability Indicators. On the web I found these diagrams of it. An American supplier of hospital beds and stretchers use it as part of their activity management tool: 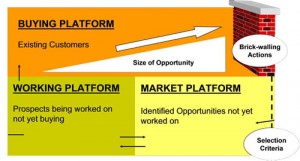 And here’s a chap that presented on it in 2009, seemingly fresh from a training course: 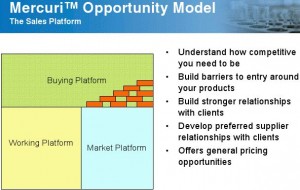 On one level, it’s another way of viewing your pipeline. Graphing this in the traditional upturned triangle way can have many advantages. Wikipedia showed the common treatment. 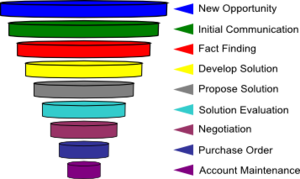 If there is a trap to avoid when doing so though, it is the over-complication of your funnel. And the above example signposts this. It’s easy to get lost in the detail and go overboard with too many categories.

Which is why Bob so enthused over his Sales Platform.

Its suspect-prospect-buyer approach is as simple as a funnel can get.

At the time I was struck by its focus on reducing attrition. There’s just about nothing worse than working like crazy to fill the bucket with water, only to find it gushes out a hole in the bottom.

I recall where this tool worked well for Keuhne & Nagel was twofold; in getting salespeople to spend less unproductive time on those not yet ready to buy, and come up with ways of continuing the conversation with and ongoing spend of existing customers.