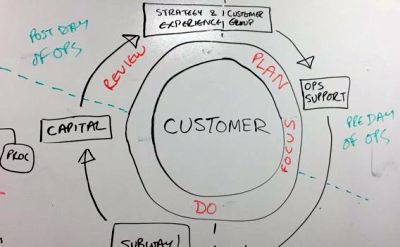 I gather there’s a new man at the helm of New York’s mass transit systems.

He comes down from the same job for Toronto. Apparently, whilst in post there he ‘attended 83 employee town halls, sometimes showing up for meetings at 3 a.m. to meet workers on the night shift’.

Which interestingly gives rise to learning of his tag of “errant wreckers”. Sadly reminiscent of the malcontents that we must banish from our salesteams, no matter where they rank:

“To people who sat in the back with their arms crossed — the errant wreckers, I like to call them — and said they’d heard it all before, I asked them when was the last time your CEO showed up at 3 a.m. for a meeting with you.”

So what also caught my selling antennae was reporting on his War Room (towards foot of this bbc profile piece);

His grandest schemes for reorganising the company are hidden away in his “war room” – a spare office turned into a three-dimensional flow chart, with four walls covered in white boards so that Byford can sketch out his ideas.

At its centre is the word “customer” encircled by the directives “plan, focus, do, review”.

This mantra, he says, will help reorganise the ranks of the transport authority around customer service, although he is keeping mum for now on his ultimate designs.

The evidence they capture of this activity (pictured up top) doesn’t seem the greatest example of cutting whiteboarding insight. Yet the mere fact this is going on is noteworthy.

If only sales departments could have such a room devoted to creating, testing, refining their process…

A pet salesroom peeve of mine is also that wall real estate is taken up – where anything is permitted to be affixed, that is – pretty much solely with corporate ads, HR messaging or the latest marketing glossies.

I hope your office does not suffer this out-dated ill.

I once ribbed a New York sales outfit for having old-school screens between open plan desks with nothing more than telephone extension lists pinned. The City That Never Sleeps dozing towards anti-sales misery. Why not mini-whiteboards instead, I prodded. You’re the innovators so surely that cheap frosted glass you can write on would be a winner.

Salespeople should be able to draw out their plans, client status, match up to process.

Hopefully the new NYC Transit Authority boss will show results from his war room. And you can too with your deskside equivalent for your own take on deal “plan, focus, do, review”.