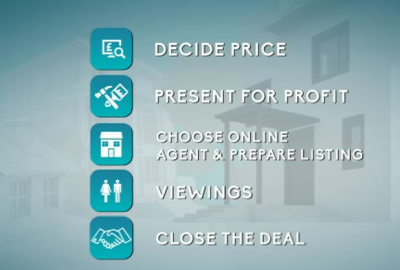 Sarah Beeny, heroine of middle England mothers. Many fine achievements indeed. I wonder how she gets on with Kirstie Allsopp?

So I absent-mindedly caught an episode in her latest tv series How To Sell Your Home.

Here she appears laudably determined to help the nation save a fortune with a classic piece of disintermediation. That is, cutting out a middleman. And which of such breed is more unpopular than an estate agent? Online house-selling sites – with their massively reduced commission costs and greater transparency – are happily destroying a role who’s time has finally come.

Ms Beeny leads couples through the wilds of the web’s options.

Incredibly – yet perhaps unsurprisingly – a couple from the less glamorous edges of Solihull with a £185k property out-performed owners of an Essex mansion supposedly valued ten times higher. The former sold practically on the day of upload and having done all the work without any of the telly show’s aid. The latter continued to throw good money after bad, ignoring much of the advice on offer and still remained firmly in the unsold category long after.

The screengrab above is the presenter’s idea of the five steps an online house seller should take.

Although a linear ‘process’ there remain a trio of gems to take from this winning formula to our selling endeavours.

Where will prospects properly acknowledge why you’re different? Gaining their tacit acceptance of this is a vital part of any process. Within her Decide Price stage is a key qualification routine.

In her Present For Profit element I loved hearing the phrase relating to tricks of the trade to up “kerb appeal”. And all for only a couple of hundred quid.

In solution selling, such kerb appeal comes from the crispness of your pitching, the coverage of your written documentation, and the calibre of those chosen to accompany you.

This third phase highlighted the gulf in selling class. The Essex husband produced a 9-page written submission. You rightly shudder.

What the Silhillian newlyweds grasped, is that such information is meant solely to move prospects along to the next stage.

There were succinct and to the point. There aim was not to seal any deal on the spot. It was rather to snag that next stage – the Viewing – with a touch of anticipation.

And therein also lies a flaw with many a corporate Sales effort.

At each stage you are not trying to clinch the signature right then. There may be several hoops through which still to jump. Focus rather on the immediate hurdle alone. Yes by all means involve the prospect in what the full journey entails. But leave the last step ’til last and you’ll get there way more times than otherwise.