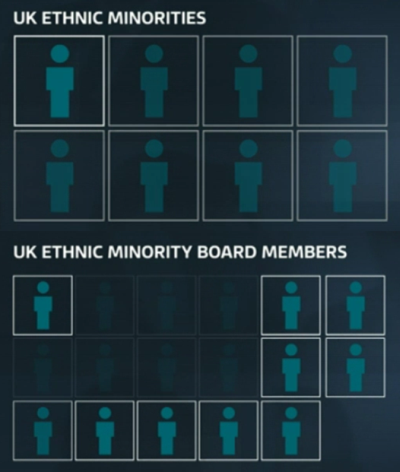 I’ve been asked to expand on one of my recent instagram posts.

Triggered by itv news graphics of a Joel Hills report on the composition of Britain’s Boardrooms.

They provide a lovely alternative to bar or pie imagery. A winning presentation slant I’m always happy to promote.

The item’s general gist was that business is bad. Disproportionally chock full of white males. How dare they…

So they displayed stats for ethnicity and gender.

They way these were shown was terrific.

Each set was reduced to its reciprocal value.

That is, divided right down until the numerator is reduced to one. For the equivalent 1-in-how-ever-many number.

First by way of suggested shortfall, then improvement.

Ethnic minorities presently make up one-eighth of the UK populous. Compared to one-seventeenth of Board positions.

I’ve featured two pairs of screengrabs to illustrate here. Yes, they animate their transitions – hence how the extra populations glow when grow then fade back as the point is made – but we don’t need to go into all that to make our dramatic comparative point.

There’s also a touch of the isotypes about it. Using simple icons to signify gender. Any such icon might work for us. Logos could well be a winner for this treatment too. You can even use photos and alter overall colour by placing a filled rectangle upon it and play with transparency settings.

What also looks good is their chosen tonal palette. Shades of blue only in this case. Again, a useful tactic where you’ve a dominant corporate hue.

It’s also best when the reciprocal is relatively simple. 1 in 10 probably sinks in better than 1 in 50.

I’d like to use this myself. Split a landscape slide into left and right sides. Only show the ‘before’ left side first. Then both together as a second slide for the impact. 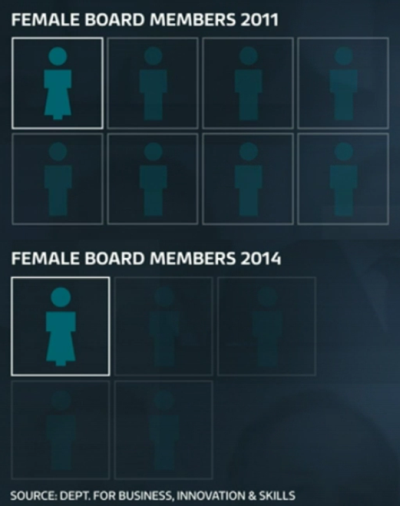