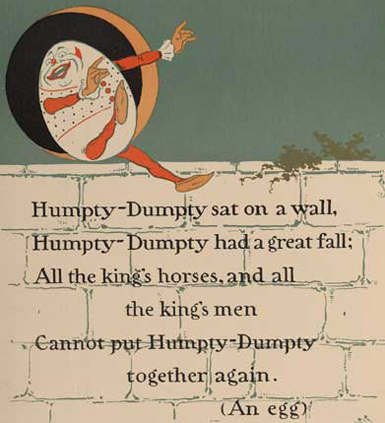 It can be remarkable the Sales wisdom you glean from Newsnight political anorak-ing.

No sooner inspired by Japanese Knotweed strategies, the heated Euro-debate (even the Pope thinks the eurocrats should be shot) conjured the tasty morsel of a Humpty Dumpty strategy.

In the context of Britain’s membership of the gone-way-beyond-single-market-evil-federalist EU, we were duly warned against pursuing policy that would leave Blighty smashed to smithereens. Fallen off the wall and expecting the 27 other countries to put us back together again. Which they wouldn’t.

So such a strategy has two elements.

Then second, one where your thoughtless actions (when they inevitably go wrong) rely on being put right by others – others either unwilling or unable to fix your errors.

To be avoided at all costs.

The sadness that overcame me when introduced to this sorry state, was from seeing too many a well-meaning salesteam suffer from following poor old Humpty.

In the strict definition of the word, a strategy requires a trio of elements.

It should evoke a potential client force as intent.

It must arrange your resource in the best way to pursue this.

It will monitor and build the campaign journey.

So in this context, I feel we can get specific.

Where’s your destination? Genuine success will look like what exactly? Which rewards flow to whom? And all framed lovingly from your eventual customer point of view.

For do you know why people (should) happily bite your arm off for what you provide?

Not what your Marketing messages bleat, but the real problems they saw disappear with your help?

Next, which part of the universe are you approaching and how?

Random calling of possible contacts by salespeople aside, where are the patterns in your target market and your targeting?

Finally, have you a process?

One that isn’t merely the regurgitated gateways of your crm?

A true model of what occurs when you virtually always win through?

Even more so, avoid being The King’s Men. Now there’s a whole different discussion…

postscript – …and who knew of the other historical English meaning? A bizarre drink combining brandy boiled with ale. I rarely drink the distilled grape these days given the trouble in my younger times with Klippies* and coke. But luckily can still enjoy plenty of real ale. Thank heavens for the current artisan brew revival. So I can definitely see that to combine these pair on heat is a recipe for disaster. A Humpty Dumpty strategy writ large.