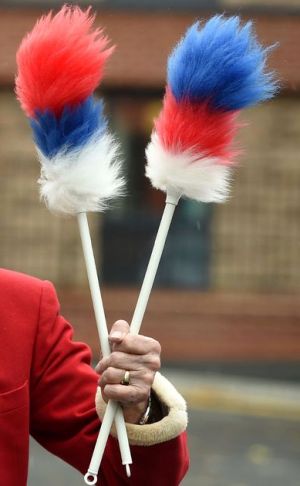 My happiness to catch a 90th birthday career retrospective fronted by the man himself, legendary comic Ken Dodd.

I remember him as a child and the crazy world he created. From his native Liverpool town of Knotty Ash with his Diddy Men and their ‘jam butty mines, black pudding plantations, moggy ranch, treacle wells, and broken-biscuit repair works’.

Whatever your generation, to watch him perform is to witness someone at the top of their craft.

One of the many surprises was the degree to which he honed his art. Stories emerged of him meeting Oxbridge philosophers, hitting dusty libraries and relentless fine tuning in search of comedy knowledge.

One such classic emanating thus;

Freud said that the essence of the comic was the conservation of psychic energy.
But then again Freud never played second house Friday night at the Glasgow Empire.

Given this self-aware focus on his profession, specific insights into ‘performing’ arose.

Firstly, I must point out that the most successful salespeople I encounter all share this trait of being self-aware. This means that they know why they succeed (and fail) and are constantly seeking to refine and improve upon such.

Secondly, many in Sales reckon their performances are akin to a stand-up. In many respects, this is undoubtedly the case. Often one person standing alone in front of a possibly sceptical audience hoping not to be booed off. In one critical sense though, it is not the same; you are not a rapidfire gagsmith seeking Ken’s seven-laughs-a-minute chuckles aplenty.

So what can our presentations take from a true master of the stage? Here’s four: