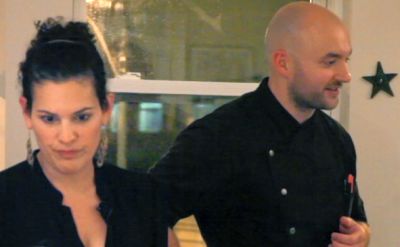 Another doccie watched on a long flight. This time a fascinating premise. Twentysomething sous chef gets disillusioned in top Chicago kitchens. So quits to allow his suppressed culinary creativity to run wild. By founding an intimate ten-seat table on weekends, at his home. In his own words later, “my underground “guestaurant” Sous Rising“.

42 Grams picks up the story where Jake’s endeavours in his flat, ably aided by his own sous chef, Matt and admirable wife, Alexa, are totally wowing the locals.

We see his driving force Quote. Taped to the main fridge door; 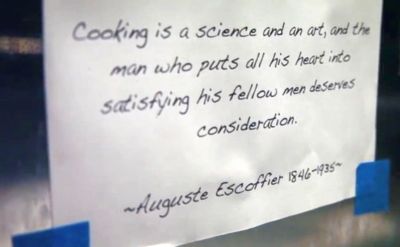 ‘just try, just do your best, that’s it, really, that’s all it is, there’s nothing about technique’

(I wondered how many sales cubicles have a real quote from their big prospect pinned to the old school wall-screens…?)

We witness the notebook page where he’s jotted down his “to do lists” – aka goals;

By age 35; “Own my own successful Restaurant” 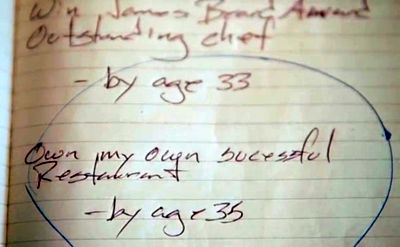 Then watch his dream of opening his place flourish. His wife quits her day job to help. They make a terrific job renovating a fried chicken fastfood takeaway. And off they go. 10 Jan 2014.

And Jake’s dishes truly are a wonder to watch.

Throughout seeing setup for the new place, there’s plenty of selling reminders. Here’s a trio;

“It’s all in the preparation. That’s the hard part.”

(he added a colourful word at the end too, signifying what you ought avoid here!)

We see him preparing a $1,400 hunk of Wagyu beef. After slicing off the outer fat he ended up with a “goofy shape”. At $93/lb it truly hurt, but he had to cut it down further for a more aesthetically pleasing look. At least he had the foundations of an amazing sauce from the offcuts.

We also see his friend and R&D companion, Tom Lynch, help out. His story of how when first in a kitchen he took so much delicate pride in plating microgreens was heartwarming. Deliberately striving for such “attention to detail” was a marvellous watch.

(I was in part reminded of the classic football manager Bill Shankly quote; “if I was a roadsweeper, my road would be the cleanest in town”.)

About 38 minutes in, we are also treated to a terrific presentation idea. With the apparent impossible ambition of earning not one but two Michelin stars during his first year, we get a mini slideshow of explanation. 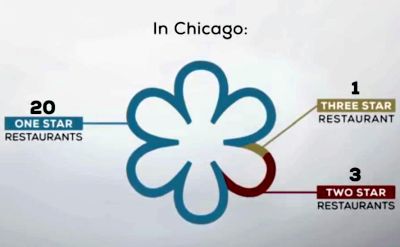 A winning slant on the piechart dial vibe. Using the outline of the actual Michelin star.

One that perhaps although not always for chart beginners, if you do have at your disposal a logo outline that could suit this, then it can make a delicious impact.

To find out what happens in the rollercoaster final scenes (and beyond) you’ll need to watch for yourself. (If you are after spoilers, then you can see what Jake and Alexa are upto today via their twitters.)