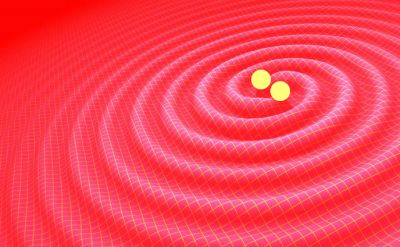 Who knew they could be so much fun?

Einstein predicted them, back in 1916. Then worried that they may never be observed.

A concern happily confounded a century on by a Nobel prize winning trio of scientists.

It is perhaps futile for me to try and describe this key micro presence of our universe.

Yet we can take much selling hope from the crack lab set that just won this year’s top worldwide physics accolade from a lifetime’s work that eventually enabled them to see the once-mystical waves.

I heard 85-year old team member Rainer Weiss revel in his overnight success. Forty years-plus with a thousand colleagues’ help in the making. Here’s his work-related train of thought when asked, “did you ever lose faith?”;

“… in all that time, we didn’t always think of the end.

In fact, the process was so much fun.

And that’s what’s keeps you going …

You don’t think about, ‘[oh no] I have not detected gravitational waves today’

No, you’ve made progress along the physical and technical direction …

The process – and the people you’re working with – make it all much, much more interesting and make it a pleasure.”

He further surmised that ‘the end point isn’t “the driver” ‘.

Any process junkie (like me) – and they tend to include every single quota-busting salesperson and sector leading sales team leader – will warmly appreciate such sentiment.

It is the accomplishment of the broken-down, component steps along the way that make the prize attainable. Not outright pursuit of the prize itself as your goal.

As it is in Nobel garlanded results as it is in selling.

Have you got your process similarly sorted yet?