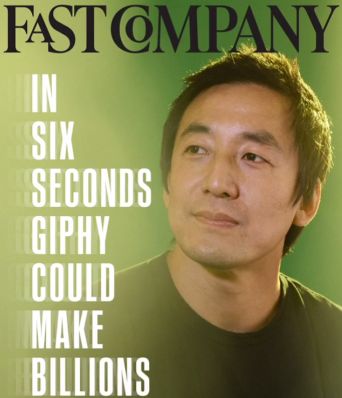 Above is the published mockup US mag front cover, as taken from their instagram.

The MOR album shoot portrait is of their founder. (& if you think that’s painful, you should see those of his younger colleagues, aiming for Best Newcomer at the MTV awards.) He’s trying to own the good old animated gif. Seeking billions of dollars in resulting revenue.

The 90s marvel is setting out to become a digital marketing staple.

But it is not merely a random vine-style video (remember them?). It is a deliberately cultivated moment. One aimed at capturing an ‘essence’. Which then loops forever, both on-screen and in the viewer’s consciousness.

I almost included one of his firm’s creations by way of explanation. Then I realised you surely must know one already.

What strikes my sales chord though, is not the media share they create from a slicing into classic film, sport or celebrity pratfall, but the implications for selling.

I thought of many examples of new products I’d worked with where a defining element of a solution sell could be encapsulated in less than 6secs of video.

The patent holder for an electricity and filament bulb saving device which when switched on, saw the light glow gradually to full power, rather than flare up with an instant bang.

The global printer manufacturer who believed themselves to be the first to eradicate paper jams and could print on the most scrumpled and ripped of sheets.

The tool maker who developed a hand-saw that uniquely could literally cut corners.

The drink dispensers who enabled an amazing four-second perfect pour for the most stout of grown up beverages.

And the numerous software vendors who now accomplish with a single-click tasks which hitherto had taken hours to achieve through other vendors.

Can you craft something with standard (free, online or giphy’s own) gif creation kit along similar lines for your wonder?

It needn’t be the top secret, ingredient X, magic bullet aspect of your bid. Simply a part which has a wow factor and can be emblematic of your stance.

Probably best not to let Marketing anywhere near your idea, mind. It should be used as a kind of final slide. To email to attendees later. To trail as what you’ll focus on next time.

After all, a picture may tell a thousand words, but you wouldn’t want to give away the whole chapter, let alone your entire book, with one, would you?