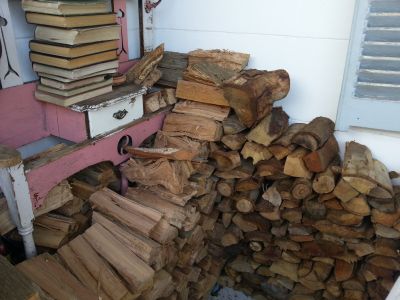 With Winter approaching, an eaterie owner began placing orders for wood to stoke the fire indoors.

A friend asked her for the firewood supplier recommendation. The one she duly gave was then phoned. The given contact happened to be the owner.

After a plain and simple introductory, ‘can you supply wood to me?’, the guy running the wood show launched immediately, and I mean straight away, into this:

Yes.
And I’m the best in Town.
I clean up after and I stack properly.
I sell 3m pieces a year and never have a complaint.
I pride myself on my delivery.

At the time, it did strike the enquirer as being a little inappropriate. Nevertheless, she signalled her intention to order a test selection for delivery at some later date to be confirmed by her.

And it is this latter point that is also crucial.

No delivery was confirmed. The next action was for a subsequent phone call to arrange the finalities.

Yet a couple of days later, the timber chap happened to be in the prospect’s neighbourhood.

So he rang to suggest dropping off the sample.

The lady herself was off-site. In a business meeting elsewhere. Phone switched off for the duration.

Incredibly, when she returned his message, she suffered a volley of nastiness, along these lines;

I phoned seven times! Seven! You’re the most difficult customer ever…!

The forceful, aggressive tone underpinned that he reckoned her to be in the wrong. Her protestations that there was no agreement for any drop off and he hadn’t even primed her of the possibility were shouted down.

To put it mildly, she felt she was being bullied and unjustly accused of impropriety.

How often does the ramming home of a misplaced pitch herald the likelihood of unfeeling, inconsiderate service? Pretty much always.

The alarm bells warned from the start.

Yet this is how so many requests for information get handled every minute of the day.

The failing of this enquiry response is brutal.

When ‘can you…’ is followed instantly by the rush into a list of completely unnecessary and irrelevant ‘facts’ about the potential vendor, you should head for the door.

How simple is it to stop this rot?

What is it exactly that you’re after…?

And let the conversation roll. You can easily find out whether all your supposed precious ‘service edges’ are welcomed from any past experiences or future hopes naturally and gently. Just do not kick-off with garbage completely unconnected to anything the prospect has so far said.