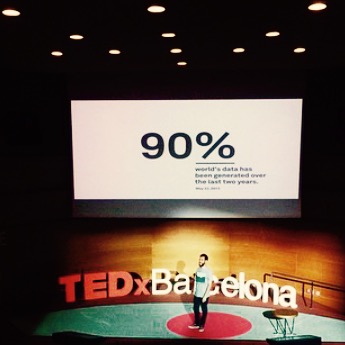 Here’s a worthy construct it’s always good to see in the real world.

A simple stark message, writ large on a TEDx slide.

Would for instance a huge slice of pie really make the desired impact?

I also like to project a single data point in its written, rather than charted, form.

It can make for a timely change during a succession of graphs. As well as heighten the impact of your point that surrounds it.

This is a figure that seems mercilessly repeated over the past couple of years. So our gestating ones-and-zeroes could be even more jaw-dropping in what they swallow once toddling.

Whilst the veracity of it may be unknown, its message is clear. Data is exploding. IBM, chief cheerleader for your Big Data dollar, claim;

“Every day, we create 2.5 quintillion bytes of data — so much that 90% of the data in the world today has been created in the last two years alone”

Yet I worry about this big number. Perhaps it is too large. Too rounded. Too manufactured. Too unnatural in feel.

Salespeople that actually get around to citing numbers always like to quote big ones. The larger the better. Invariably conveniently whole ones too.

Yet it can often be that the smaller number gets greater positive recall. More believable. More precise. Hardly an awkward, made-up feel.

So in this instance, would firstly the flipped ‘negative image’ be better?

of the total in two years time, all the data in the world today will only make up 10%

Whatever the growth in big data, you can still win with a cheeky big small number in your next deck or Proposal summary. Find the figure that makes your difference and plaster it across your page.