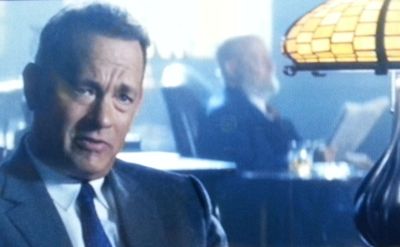 Spielberg Cold War drama Bridge Of Spies. Tom Hanks’ insurance lawyer James Donovan becomes hostage exchange negotiator of legend. Here’s three tips gleaned from his approach to trades for us in the solution selling sphere. Salespeople are, in my experience, woeful at this vital discipline. Any help gratefully received. Indeed Hanks himself in interviews mentioned he’d learned to always let the other person know how they’d win from the deal. Here’s three more nuggets:

One Trade Can Have Many Exchanges

Perhaps the most tricky for salespeople to grasp. So often we deal in individual, discrete variables. A single, unattached item will be the sole focus and its discount debated in isolation.

Occasionally an advance on this tries to match the wane of that item offset by the wax of another.

Not for Jim. An early scene pits him acting for an insurance company against a lawyer representing five motorcyclists. Aggrieved because the insurers of a car driver that crashed into them split their payout among them. As Jim explains, it is one driver so just one driver accident. By way of illustration;

“If I go bowling and hit a strike, one thing happens, not ten things”

The rebuttal was quick to this though, so he tried another analogy;

“If your house is insured for $100k and a tornado carried it away, it took away one house.
It didn’t pick up every single piece of furniture and destroy it in a separate incident.”

When challenged once more, he winced, paused and said that if this were not true, “…then there is no limit to our liability”. Making his adversary think twice.

Later, he successfully redeploys this logic when swapping one prisoner for two, insisting it was but still one trade alone.

The closing credits (snapped below) show how his skill developed even further on this score. 1,113 people captured in Cuba became 9.703 freed.

In that initial legal debate – looking suspiciously like taking place in a Gentlemen’s Club – the opponent also kept saying “your guy”. It was pejorative. Aiming to associate a perceived ‘bad guy’ with Jim. He was having none of it. Each time he was hit with this label, he slammed it down. His guy was the insurer, not the insured. He kept making his point and eventually the other chap folded. Another point won.

This is a scenario I’ve encountered in dealtime bartering. You must stay strong. Be firm and not allow any slights at all to stick.

On the bridge of the title during denouement the Communists display brinkmanship. They appear to with-hold one of their prisoners; “They’re just seeing if we’ll do it without him”. Under great tension, Jim makes sure his trade fully goes through and passes “the pressure test”.

Another buyer trick is to withdraw an element of their concessions at the death. Do not fail. Do not accept this tactic. Get what you deserve.