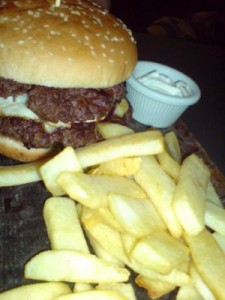 Plenty of news coverage these past few days has gone to McDonalds now publishing their menus with calories on.

As someone who weaned himself off a need for daily burgers and chips in my youth yet still partial to the occasional Steers’ Wacky Wednesday, I was alarmed to see the huge amounts of energy their stock in trade carry. One brief snacking visit and over half your daily intake can pummel your waistline.

This of course shouldn’t be too much of a shock. ‘American fast food bad for you’ is hardly news.

What did alert my sales antennae though, was hearing the soundbites of various advocates and health officials. The politician in charge, Andrew Lansley, gave this insight from a Starbucks example;

When we asked people what calories they thought were in a semi-skimmed latte or a blueberry muffin they said around 320.
They’re really over 600. So there’s an in-built optimism bias.

So. When something’s not great, a natural ‘optimism bias’ kicks in making you believe that it’s only half as bad?

I was intrigued, as if true there’s plenty of solution selling ramifications.

Then I found a whole meme around this. Here’s the British government’s definition;

Optimism Bias is the term used to describe the demonstrated, systematic tendency for project appraisers to be overly optimistic about project costs, duration and benefits

They even suggest remedies. And of course, there’s a Wikipedia entry, from which I also chuckled at the discovery of strategic misrepresentation.

Regardless of what academia may recommend, I’ve always found that when crafting a proposal so many essential factors produce a range of possible figures. When they do, it is unquestionably advisable to err on the side of conservatism.

Presenting the lowest impact (longer payback, smaller benefits) and still having a compelling business case is a long-term winner. Now that I’m able to quote the optimism bias, I expect it to be ever more so.