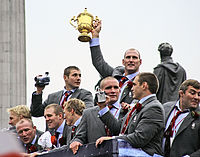 As the latest Rugby World Cup kicks-off in New Zealand there’s been a great deal of reflection in England upon the past two tournaments.

When they conquered all, England were ranked as the top side and highly fancied. Four years on, they were dismissed as no-hopers. Especially after a brutal defeat and lacklustre displays in the pool stages.

In ’03, coach Clive Woodward was many years in to the job and had left not even the tiniest planning detail to chance. His mission for the team ethos was;

A cycle on, the incumbent coach had been in place just a handful of games. He had similar, in his own words, “off the wall” beliefs about creating a common purpose. Brian Ashton was watching ESPN Classic and caught a show on boxer Muhammad Ali. He spouted all sorts of rhetoric and during one particular fight’s build-up, one phrase stood out. Ali wasn’t thought to have the beating of his opponent. So he stated his aim was to;

When he explained his idea, they agreed it was a “great slogan” and all embraced it.

All sorts of contributory factors helped England defy the odds and reach the final (the 10 big hitters from the previous campaign finally appearing in the same team, the clear-the-air free-for-all trademark-Ashton meeting after the heavy defeat allowing players to vent and move on, the togetherness from the playing of Kenny Rogers’ song The Gambler before games, the realisation that they could play with freedom as long as they held responsibility and accountability and the acceptance that a structured “game plan” wasn’t necessarily a pre-requisite to victory) but they all came under the umbrella of Shock The World.

If only some of the team hadn’t lost their belief before the final match. Ashton felt there’d been a lack of certainty in the last week. They’d surpassed expectations and that was enough. And of course there was that dodgy Aussie TV referee.

Still. The summary mission was deemed a winner. Now. You might not quite be able to manage a three-worder like England, but somewhere surely there’s a similar mantra awaiting your ambitions…