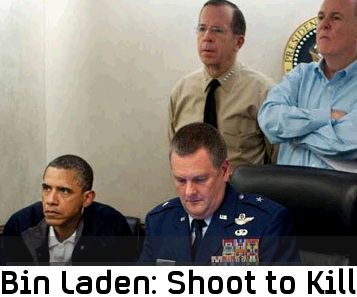 What a terrific documentary this is. It was shown for the first time in the run-up to the ten year anniversary of the ignition for the War on Terror. As British film-maker Channel 4 themselves pitch, it is “the most complete story yet of the operation to find and kill Osama Bin Laden”.

There’s several things to think about from a sales perspective from the telling of this tale.

A decade after the Twin Towers, the Americans hadn’t a clue where public enemy number one was hiding. Then in August 2010, one innocuous mobile phone intercept offered up a lead. We often stumble around looking for the perfect deal opportunity. One where we get in right at the start. Preferably having created or uncovered the need ourselves alone.

The Americans knew they needed to think differently to track him down. So they re-thought how they’d get close to Bin Laden. Go after the human connection. Find a courier. And the conversation they caught featured a possible (Pakistani) courier known as the Kuwaiti, calling a known Gulf State al-Qaeda sympathiser;

“Where have you been, we’ve missed you?”

“I’m back with the people I was with before.”

Did this mean he was again courier for Osama…?

A new line on your forecast can emerge from seemingly the most small of seeds. Where are you looking for yours?

This is crackers. Once the US began to watch the possible safehouse as identified from a visit of the courier, they were worried the local children might damage things. They often played cricket outside the tall walls. Then one day, someone smashed a six. Right into the grounds of the compound. What would kids the world over do? They couldn’t climb over the razor-wire topped brick, so they knocked on the door and asked for their ball back.

Only the inhabitants were cautious. They wouldn’t return the cherry. Instead, they handed over some cash. The kids cottoned on immediately and so ran a bizarre sequence where they’d repeatedly clear the perimeter and keep getting money when they banged on the gate.

The Americans were concerned this routine would spook the inhabitants and their chance would disappear.

There are a hundred and one outside forces that can derail your deal. How prepared are you for them?

Satellites overhead produced stunning images of what was going on in the yard. They noted someone continually walked about, but never left. Could this be Osama? They tried all sorts of maths to use shadows and angle of the sun to judge whether the man shared Bin Laden’s atypical height; six foot four. Although they couldn’t pinpoint this, probabilities raised. They nicknamed the man “the pacer”. The one they needed to get to know. Who’s The Pacer inside your prospect organisation?

Opinions varied wildly as to whether The Pacer was indeed the target. The swing was as much as 30 to 90 per cent.

So they instituted a “red team” exercise. This brings in an outside team. One that is not invested in the operation. Different eyes to take a fresh look. At everything.

Even though they significantly reduced the probability of Bin Laden being the pacer (between 40-60% as opposed to the CIA’s 60-70) everyone questioned seem grateful for the extra input. When a big deal is well underway, who is in your Red Team?

At the end, you get insight into how much planning really went in. To avoid creating a press hunt, all the required pizzas were ordered from multiple ovens (apparently a dead giveaway when in the past 20 had been ordered in one go late at night people smelt that something big was up). When all White House tours for the day of the mission itself were cancelled, one journo did ask a question, but was satisfied with a simple “it’s a plumbing issue” response.

On the ground in Abbottabad, when one of the two helicopters crash landed, the control room feared the worst for the enterprise. Yet without even a change of tone of voice, they marvelled at how the navy seals continued, the General calmly saying that they were prepared for that contingency.

In commentary, one participant chanted his unit’s core values;

slow is smooth, smooth is fast

What do you do when knocked off your axis slightly on a big deal?