Oh the glamour, I found myself travelling to and from a town called Solihull. I approached this journey with interest. A glut of works just finished to upgrade the line and slash half-an-hour off the trip to London.

The rail operator in question plastered billboards in the locale to trumpet this time saving. On Chiltern Railways’ website there’s this graphic;

and this handy comparison to also herald the improvement; 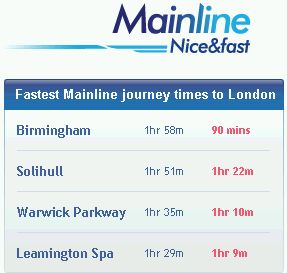 So I went online to download their new timetable. The link to the pdf was broken. So I had to call their helpline. The young lady I reached told me she didn’t normally receive such calls and tried her best to help me with times, but didn’t seem all that interested at my observation on the missing link.

I subsequently picked up a physical timetable at the station. Now, I could be proved mistaken, but I only found one run at the trail-blazed 82 minutes. One. 7.03 arriving 8.25. And then only one further at 85 mins. Pretty much all the rest, whilst offering some kind of improvement at certain times, leave you wondering what all the fuss is about.

Here’s a blurry pic taken of page one on the train itself. 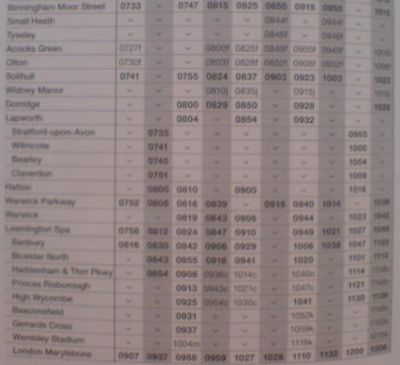 I’m sure we’re all pretty familiar with this kind of layout. It does the job I guess. They could have introduced another greying horizontally on the biggest stations possibly, or you could apply your own highlight across the row of your regular departure.

Still, I’m not convinced it’s a quality representation as per the “fitness for purpose” definition.

Their current selling point is the new super-quickness. So why not have an extra graphic which shows only the speediest trains? It wouldn’t be difficult. Emblazon column headings with the minutes. (Take a lead from the pocket guide I saw later which only has six stations listed). For Solihull to London there’d be less than a handful you’d need to highlight. I’m sure it’d be an improvement on what’s offered at present.

As for my journey? The train I booked was cancelled. The next one, half-an-hour later, was so overcrowded I almost had someone sitting on my lap. And it took 121 minutes. That’s roughly half-as-much again as their advertised 82. Soul destroying.