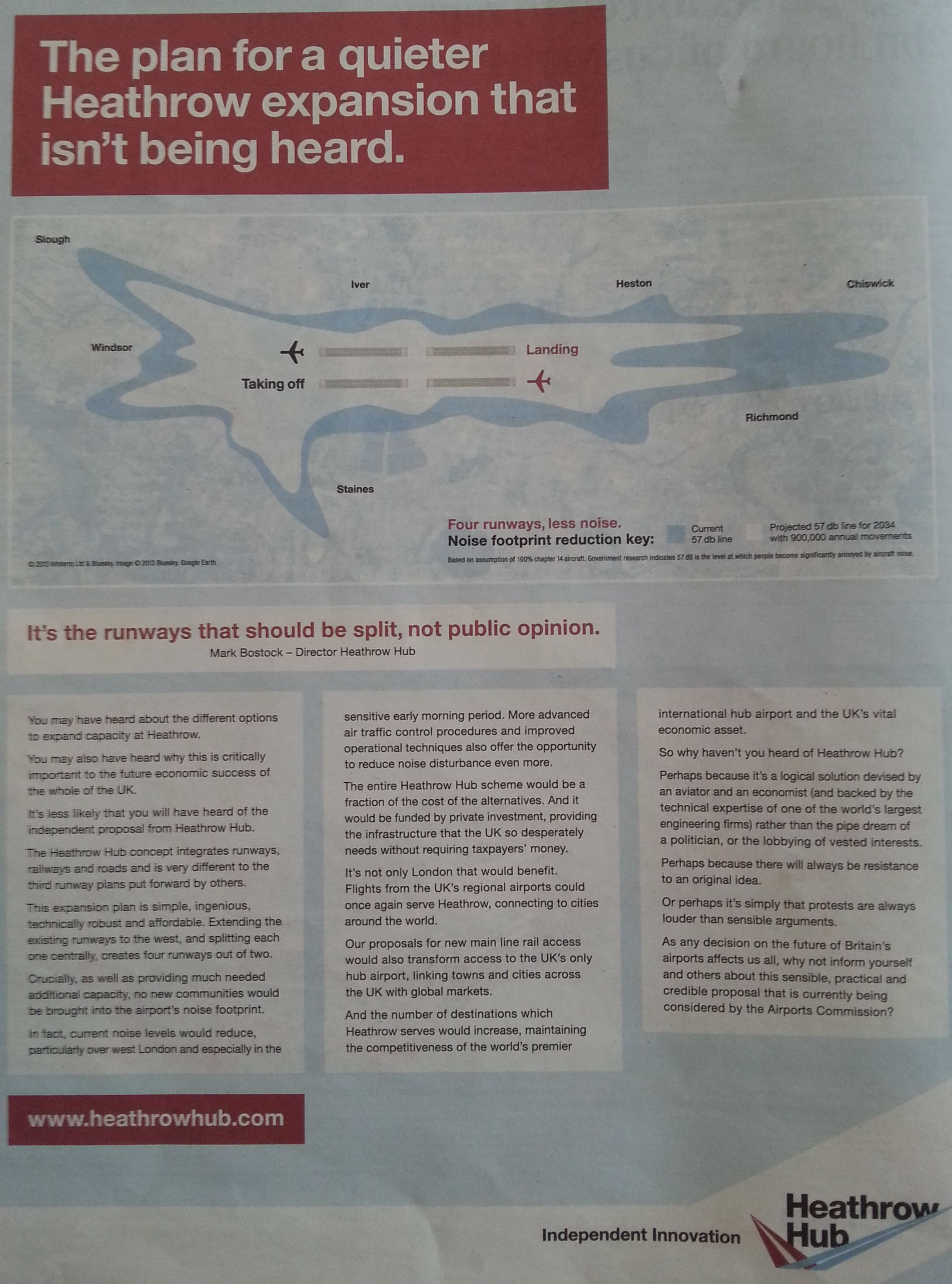 So, let’s get this straight. Having lived under the Heathrow flight path for many a year – which means practically anywhere even remotely near London’s River Thames – and suffered repeated rude awakenings at 0600 as huge metal tin cans clunk their landing gear right above my sleepy head, I am dead set against Heathrow expansion.

And that’s not the only reason either. It is surely sheer folly to throw good money after bad, and while the authorities procrastinate on what should be a new airport to the East, the nation’s lag behind local rivals creeps cripplingly ever farther backward.

So in Monday’s Times I read with interest a full-page ad from an outfit called Heathrow Hub. Nice logo. Evoking their two down, two up, approach to “runways that should be split, not public opinion” at the heart of their idea. (Click on my pic of the ad up top to see an enlarged image).

I must say I applaud this method of selling a concept, even if it is one I find flawed.

I instantly thought how brilliant this could be in a solution sales setting.

If you cannot create something like this, then do you really have a winning project?

Let’s look at the format.

Headline. There’s a one-sentence summary of what they want the reader to take from it. I like that they’re not saying exactly what their plan is, merely that it’s about time you knew about it. A soft sell.

Pic. An easy to understand diagram follows. Now, not every bid can be pictured like this, yet there is something saucy about the presentation if you can conjure something similar. Any before-after diagram, perhaps like a process flow, might do the trick.

Detail. Well, there follows three columns of blurb outlining the idea. I would have to say in this case, the intro isn’t tight enough. I’d major on the problem being resolved, framed in a way that makes ‘our’ solution the top option. There’s no description of any problem, and they are too ‘me me me’ with their stance. The middle column sees an improvement, as it moves onto benefits, then the final third has these wonderful four sentences;

So why haven’t you heard of Heathrow Hub?

Perhaps because it’s a logical solution devised by an aviator and an economist (and backed by the technical expertise of one of the world’s largest engineering firms) rather than the pipe dream of a politician, or the lobbying of vested interests.

Perhaps because there will always be resistance to an original idea.

Or perhaps it’s simply that protests are always louder than sensible arguments.

And then there’s the call to;

“inform yourself and others about this sensible, practical and credible proposal”

There’s plenty in this winning template to take to your current big deal. Keep it to a single sheet and, especially when worked out in conjunction with your prospect contact, could prove a clinching differentiator.