So the Las Vegas global gadget-fest that kicks off the year is always good to fill the airwaves in a slow-news week.

The Consumer Electronics Show may not feature all the big boys, but wannabes and wonders abound nonetheless. Smart tellies, some that wouldn’t fit through my front door, are big this year. Last year I saw ultrabooks and wanted one. But never got one. This year, they appear absent…

Anyway, Skynews awarded this years jolly to Niall Paterson. He even took time to file the odd report.

Each day’s was well-themed. The most intriguing being one that focused on the Brit inventors hoping to make their name there.

Now, I do realise the editing suite may greatly contribute to such a train smash of ambitions. But even so, it does give the chance to remind on how to properly pitch a new product.

Let’s start with the first debris. Here’s a chap talking about a sort-of-standard telephonist’s headset, but with a mini-screen where the traditional mouthpiece part hovers.

“The idea being that whenever you’re using it you have your hands free to do the job you’re supposed to do, yet the information is available just below the line of sight.

At the moment it’s being aimed at light industrial use, so police, fire brigade and those types of applications – but who knows where it could go.”

So, he doesn’t know where it could go. And by the sounds of it, not too hot on where it is today, either. No quick-fire example. No glimpse into the benefit of such a gizmo. No spark.

Then there was the chap peddling (!) an automatic gearbox for your push-bike. 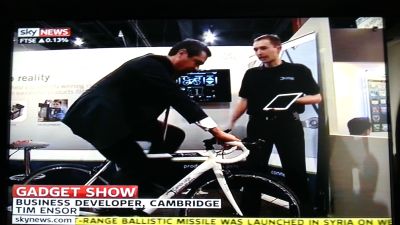 “So basically what we’ve got here is a fairly standard high-end bike.

It’s got electronic gear changes on the back.

To that we’ve added wireless connection from the gear changes.

We’ve also added sensors that measure the wheel speed and the speed which you’re peddling.

And what this allows you to do is essentially first of all, from here I can change gear on you … so peddling’s getting a bit harder, yeah…

This is because we’ve added a smart platform into the system, we can also run algorithms on this platform to essentially make an automatic gearbox, automatic transmission, for a pedal bike.”

Well. There you have it. Algorithms, smart platforms and electronics.

Nothing on why you’d want any of this. And the words ‘automatic gearbox’ popped up only as an after-thought almost, right at the end.

When running through your shiny new pride and joy, it is so easy to fall into merely describing everything as seen.

Start with the end in mind. Why are you trying to change the world, in your own, small way, today..?