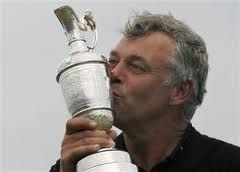 What a pleasure to watch Darren Clarke unexpectedly romp home to golf Major glory on Sunday.

The record book updates are startling. No one has first won one of the big four after so many attempts. Only a handful of 40-plus aged players have a slam to their name, let alone being in their fifth decade for their breakthrough victory.

I’ve been fascinated to hear numerous appraisals of how he managed to get his mind right.

It was clear from the tv pictures that Darren was the only protagonist enjoying himself on the course. He seemed so relaxed. Whatever happened, including some of the most atrocious weather you could ever imagine trying to swing a club, he was constantly smiling and chatting away with any and every one of his playing partners, officials and assorted hangers-on.

Before the tournament he was reminded of what seems to be a key quote from his friend and former Ryder Cup-er Ken Brown. From 1997, it repeated the piece of advice that preceded his awesome American-bashing performances, including ones only six weeks after the death of his wife in 2006;

Elsewhere, other observers cite the renewed influence of an ever present shrink, Bob Rotella.

“I told him, ‘You are going to have to go unconscious’. I told him I didn’t want him to think about technique. I just wanted him to look where he wanted the ball to go and hit it – like he did when he was 12 years old.

“I used to work with stammerers: 98% of them could talk when they were in their bathroom; it was just that little doubt in public which tied them up. He had the skills – he’s a talented athlete; it was a question of freeing them up.”

All in all, it worked as he saw sunshine through the clouds.