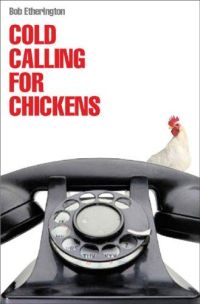 The chicken of the title is you. That is, if you shudder at the thought of cold calling. The author believes in paradoxical thinking. Openly embrace being that chicken and you’ll turn into a winner.

A similar dichotomy also sits at the core of his teachings. He acknowledges how cold calling must progress from his early dark ages (back in London of the 70s) yet his proposed evolution exhibits the self-same traits that made just such thinking ultimately flawed.

Many of his stereotypical motivational snippets can be both entertaining and useful. Covering up segments of an office clock, displaying the “canticle of cold calling” and to “get rid of the infected desk-percher” strike a chord.

His cold call scripts though, well, they’re wholly wrong. A poor attempt to pass off old school as new. He cites examples of openings he thinks rubbish. And they are. But when he suggests an improvement, they sadly suffer from being of the same ilk.

Then I found a blog post of his. Written some five years after this book. He since discovered Ari Galper. Not only does he fail to effectively communicate the main marvel of his approach, he neither has the grace to credit him when passing his ground-breaking findings off as his own.

At a stroke, this renders much of his book obsolete.

He tries to add ideas to the subject area, but many don’t fully hit the target.

His ‘update’ to the traditional AIDA (crazily labelled IKEA), the “lazy person’s route to wealth” (he even bewilderingly channels Noel Edmonds’ “cosmic ordering”) and his suggested voicemail message is just plain woeful (Good morning [theirname], this is [yourname/company/phonenumber]. I have an issue about your [departmental area] which I would like to discuss with you. Would you please give me a call at…. Thank you, [theirname].).

So is there anything to take for successful cold calling today?

Thankfully, there were a few tips I’d recommend.

Write your to-do list the night before (from an American consultant gig a century ago), his list of 13 wallow-in-pain questions (although use some with extreme care) and unreferenced figures to prove you must not give up before at least the sixth call (reminiscent of Guerrilla Teleselling eight years earlier) are all decent steers.

Perhaps the one nugget I discovered though that I will be using in the field is his quoting of “the 4 Ps of Persuasion”. People only buy when they feel one or more are in play; power, profits, prestige, pleasure. You could write a whole book on that alone.