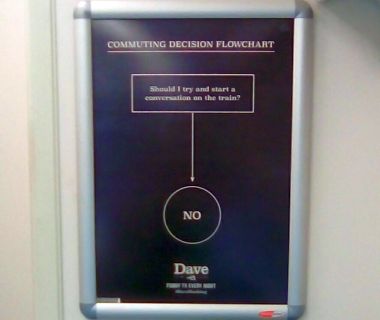 No sooner had I blogged on how to gently open up someone you meet prospectside for the first time (inspired by workplace vicinity eating) when I then saw this ad on a train.

Q: Should I try and start a conversation on the train?

It’s not hard to imagine this transferred onto solution sales.

Q: Should I try and start a conversation with a possible customer?

Yet that’s not what I observe.

Definitions for “conversation” appear to often differ for salespeople from that of the wider population.

I’d also say that the single biggest reason why a verbal selling transaction fails is because it never reaches the status of conversation.

How do you define this hallowed event?

Let’s start with what it most definitely is not.

An example more likely from the phone, but can also rear in person.

You deliver a breathless mini-pitch; they give an objection, you ‘handle’, this cycle repeats to fade.

Typically with you losing out.

If you’ve experienced this kind of pain before, you might also be able to recall when something else happened.

When you engaged in a properly two-way discussion.

I’ve even heard these referred to in an American sales office as “bi-directional”.

You’ll recognise it as where your prospect waxes happily about an issue that sounds like it’s been playing on their mind.

They explain it, and accept your further questions to add colour and depth.

So rather than telling someone what you do, have you tried asking them if they’re looking at (or to do) something you fix, improve or unleash?