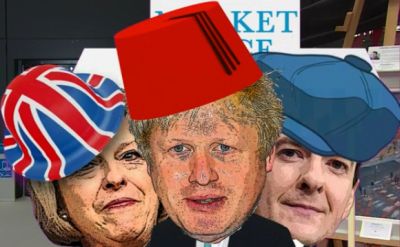 It’s a rare delight when you admire presentation of a rolling news journalist.

BBC’s Norman Smith provided this when reporting from the UK’s party of government annual conference.

Their next General Election in 2020 will be fought with a different leader.

Already a trio of heavyweight candidates dominate the frame.

In keeping with the winning theme that caught my Sales ear, three elements shone. All within a triangular umbrella.

First up, the fact three options were proposed meant a stark binary aye-nay was not in play. Especially useful when you must split your opposition.

Then a hat-trick. Each was covered with fitting headgear. Perhaps comedy in this case, yet still an intriguing hook to set you apart and lengthen recall.

Whilst we don’t have the luxury of a television producer whispering into our earpiece, we can make flashcards and surely posses the ability to write, remember and recount our own 3×3 matrix.