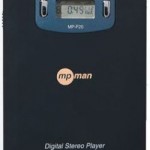 A cheeky ‘weekend’ type post. I learned today that I was once an early adopter. I had the world’s “first portable digital music player“. I bought mine in 1999. It was snappily called the MPMan. Even with the biggest extra memory card I could buy for it, it could only hold little more than a dozen tunes. No surprise that the iPod was plotted as a market shaper.

What I didn’t know was how the iPod could have been a Sony product. The Guardian’s iPod ten year anniversary piece credits “a 32-year-old engineer called Tony Fadell” with having the idea of wrapping such an item inside a delivery mechanism. Sexy hardware with simple content source; iPod & iTunes. Sony weren’t the only company he’d pitched his vision too, but only Apple picked it up. The rest, as they say…

So a number of ‘experts’  (also supposedly including Real Networks and Philips) passed on the most game changing product of the decade. One which helped transform its maker to become the second largest company on earth.

I love this kind of story. I’ve blogged before about lessons in perseverance. Salespeople do rather enjoy tales of how a mega-product was so bafflingly stymied when first pitched.

I like them in part because they help let the point dawn on those about to pitch a brand new product that not everyone will “get it” straight off.

I also just heard George Michael PR’ing Comic Relief encouragement. When he was 17 he felt his voice wasn’t the best. Determined to become a popstar though, he went along to auditions at record companies. After one such ordeal, the executive he sang to said basically;

The song he performed at his audition?

Within five years it became one of the biggest selling singles of all time.

There’s the makings of a good slide about how you need to expect knock-backs when selling new gear here, right?