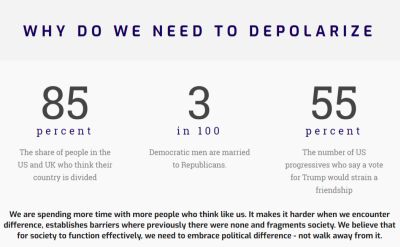 I recently came across this explanatory box on the California-based Depolarization Project. Which British Liberal Democrat Alison Goldsworthy “set up in the wake of the 2016 presidential elections to encourage people with opposing views to listen and learn from each other”.

Wherever your perch on the political spread, she does appear to have two vital insights into solution selling.

What to do when someone buyerside seems immovably entrenched in their views?

1. “The first thing is for people to have a common bond that’s not about what the discussion is about. That could be anything, even what football team you support.”

2. “The second thing is how you ask them to explain their position. In effect, rather than saying: ‘What’s your reason for saying that?’ you say: ‘Did you have an experience that made you feel that way?’ If people feel they’re explaining rather than justifying, you can have a better conversation.”

As is then surmised; ‘This gentle, unconfrontational and often very gradual process chimes with that described by many people who change their minds in real life.’

We often encounter prospects stuck in the first half of the phase of change cycle; denial (with a possible dash of anger) and resistance (alongside potential confusion).

Switching the frame from justify to explain strikes me as one fruitful tactic to ensure we gently move them along the scale.

Are you searching for such experience over reason?