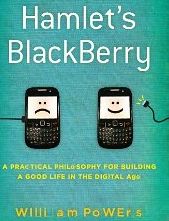 I caught a radio interview with an American chap called Bill Powers the other day. He was moved to change his life when he identified the drain of the “vanishing family trick”.  People that ought be really close fade away from each other in search of their screen. His resulting book was called Hamlet’s Blackberry.

He also mentioned the trauma of recovery time. He quoted research that looked into what happens when someone is interrupted by the internet in the middle of a task. Whether checking an email, facebook or tweeting the results are startling.

It takes anywhere between 10 and 20 times longer to get back into your task than the length of the technological distraction in the first place.

“Psychologists tell us that when you abandon a mental task to attend to an interruption, your emotional and cognitive engagement with the main task immediately begins to decay, and the longer and more distracting the interruption, the harder it is to reverse this process.

“By some estimates, recovering focus can take ten to twenty times the length of the interruption. So a one-minute interruption could require fifteen minutes of recovery time.”

Yet there’s greater alarm. Within what he terms the “Conundrum of Connected Life“, he believes that such recovery time takes up a whopping 28% of the workday. If over a quarter of your selling time is so crushed, then how on earth will you make quota?

This in itself should be quite a wake-up for personal selling productivity, but it also raises an allied thought.

What is your prospect’s recovery time?

When you sell to them, they have countless diversions from your pitch. How long after each one does it take to regain their full attention?

Another way of thinking about this is with the lag between each conversation. Without becoming a stalker, what’s the optimum frequency with which to engage your prospects that ensures you maintain a winning momentum?