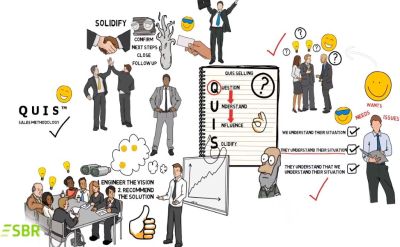 To ignore process is treacherous in the extreme.

Always on the lookout for the thought of others in this arena, I happened across q-u-i-s.

As of March 2019 now seemingly defunct, it was developed by London-based consultants. The image up-top a summary slide of their then deleted online animated vid.

Far too many are modern but simple re-visions of the traditional ‘take on less calories, burn more off’.

And so it is in the heat of our kitchen.

This particular flavour belongs to the trope whereby ostensibly a call-plan rubric can spread itself across an entire campaign.

There’s nothing necessarily wrong with these. It is after all infinitely better to have any procedural platform rather than none whatsoever. The odd one may even stand a test of time, fondly recalled by a wizened seller decades later.

Yet I am always reminded of an LA erp vendor when pitching their sales module add-on, pre-dating the industry term ‘crm’ by a few years;

“don’t put your sales process in someone else’s concrete…”

Which is not to say you must abandon anything from outside and build afresh from within. But your starting point should always be why you succeed, then wrap in and around this the best elements of what generically works. Whether that includes, as the above video selects, tactics from the likes of “Target, Miller-Heiman, Spin or Meddic…”

Accompanied by the misfiring homepage strapline; “As a sales leader, you’re looking to accomplish two simple things: drive revenue and increase profits”. Now I am no marketeer, but I cannot imagine any of their target audience of ‘sales leaders’ nodding their head along to this generic statement. To ‘drive revenue and increase profits’ are absolutely not the reason why the sales leader justifies such sign-off. Perhaps they might consider building on that instead.

As a sometime-methodology omnist, I can see there are some worthy morsels within their framework. They key to winning comes in choosing to add in the couple which work for you and merrily discarding the noise.