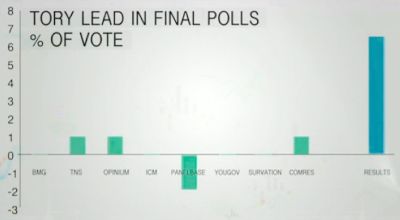 Calamitous. Crashing towards the criminal.

As the BBC Newsnight graphic above so ably shows, the UK polling industry stock is in tatters.

The lack of apparent humility from industry “leaders” is astonishing.

Take Peter Kellner (somehow head of a polling company supposedly worth an outrageous 120 million). He seems to blame the media and politicians for believing what he charges for.

Take John Curtice (sector body ‘president’ and main number cruncher). He seems to blame the public for wilfully misleading him through their “late swing”.

They’re not just in denial. They reckon it’s everyone else’s fault but their own.

I refer to the wholly inaccurate voting shares predicted for the two main parties in the General Election just fought.

The result was, they cry, within the margin of error.

And what, they urge, about the Exit Poll?

Closer, but still some way short of the modern mark equivalent of a cigar.

Commentariat opprobrium verges on the vituperative.

The two biggest camps across all 91 surveys stood, we were informed with an air of authority, neck-and-neck.

34-33 appeared a typical percentage split at the death.

Their denial merges with resistance.

With the eventual vote 37-30, should you cite that figures duly sat within the oft-quoted 3% margin of error? The ComRes chief thought so, “for all the sound and fury, most election polls were within the margin of error”.

Kudos to his rivals that accepted their serious shortcomings.

He though, is so wrong.

Yet that technicality misses the point entirely.

Hats off to the WSJ reporting. When one firm (Survation) saw their final work deliver a 37-31 answer, they dismissed it as mistaken. Pushed by a desire to avoid the ridicule rightly lathered on Kellner’s Yougov after their Scottish Referendum game-changing (inaccurate) rogue poll, they decided not to publish. “Chickened out” being the laudably honest phrase they used.

So what caused their disgrace, and what does it tell us solution salespeople?

The words Nurse and Shy should feature in any upcoming sales forecasting session.

A Canadian pollster attributes in part the idea that people say one thing then do another to the concept of “holding on to nurse”. His way of saying they’ll eventually stay with what they know rather than plump for an untested alternative.

A former govt MP (who also tried in vain to tell anyone who’d listen that the pollsters were wrong this time round) coined the special use of the adjective “shy”. It labels those that don’t feel they want to openly admit to their particular (in this case, right-leaning) selection.

Hence my favourite social media comment of the night. The delightful riposte to the Labour t-shirt and badge slogan, “never kissed a Tory”; “you probably have kissed a shy Tory”.

The inescapable selling parallel is for a ‘disrupter’ to always question the veracity of your perceived reversion point reversal.

Test for the shy. Test for those with nurse. And test again.