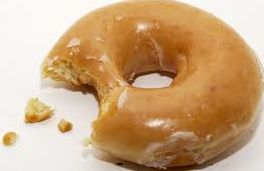 Here’s a wonderful idea with two strands of sales insight. It comes from the Blackberry device makers, Research In Motion (RIM).

The story starts shortly after their 1997 IPO. As the stirrings of dotcom mania raced towards a maddening burst bubble, RIM’s co-founders, Jim Balsillie and Mike Lazaridis, wanted less chat about the soaring share value, and more focus on the business. So anyone caught mentioning the stock price had to buy doughnuts for the entire staff.

Early infractions were not terribly painful for the culprit, but as the company grew, that changed.
In 2001, the chief operating officer mentioned RIM’s surging stock price in the wake of a call with analysts and was saddled with the task of delivering more than 800 doughnuts to the next weekly meeting of employees.
He even had to make special arrangements with local doughnut shops to get enough.
That incident apparently seared the doughnut rule into the neurons of managers at RIM, which hasn’t recorded an infraction since then.

It’s a neat anecdote, but what consequences are there for us sellers?

The author of the above quote was writing about a third phase of capitalism being upon us. The previous two being flawed to obsolescence (Managerial Capitalism from 1932 and Maximise Shareholder Value from 1976). We are now required to progress to Customer Driven Capitalism.

This very much reminds me of the growing meme surrounding what should be your primary driver. Many have thought the acquisition of money in itself was the main force. Now, I hope I am part of a growing band that understand it is really the pursuit of success that should be paramount. I truly feel that the best salespeople I know think first about how to serve their clients rather than how to fill their quota. Targets are smashed as a happy result of fulfilment.

Several game changing studies have shown that the blind pursuit of corporate financial goals leads to failure when compared to those that follow non-financial ambitions.

If something is so distracting, then why allow it to scupper your goals? What is your selling equivalent to RIM’s stock price? Is it mention of an irrelevant HQ edict? Competition? Or anything that takes focus off the delight sought from serving a customer? Bring on the doughnuts at your next team sales meeting.