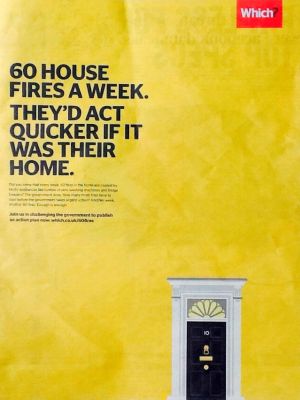 I cannot say that I am fully behind the supposed English consumer pressure group, Which?

Some of their campaigns fall foul of being impartially biased against common sense. All too happy to lazily lambast the government of the day, rather than promote the positive, collaborative slant of the change they’re after.

Although their latest push – despite my reservations as to their angle and targeting – has garnered impressive media pr.

Above is an example of its print advertising, as pictured from last Friday’s London Times (full page spread, p23).

Riskiest appliances – Faulty washing machines and tumble dryers are more likely to start a fire than any other appliance. Our analysis shows 35% of fires were started by one of these appliances between 2014-16.

Recalls aren’t enough – Only between 10-20% of people will actually return a faulty product when it’s recalled. Recalls alone simply aren’t effective enough to quickly get dangerous products out of your home.

The maths feels a touch shaky to arrive at their finding that “an alarming 60 house fires a week are started by unsafe products”.

Yet it is the campaign landing page url after the forward-slash which grabs my Sales attention; 60fires.

As the advertising copy begins; 60 HOUSE FIRES A WEEK. (Eminently hashtagable when ..) shortened to 60 fires.

Many a solution bid has their own fire(s) they must douse. Prevent igniting. Remove a potential cause of sparking alight.

What is it for your prospect? How many of them may presently rage? Where’s their equivalent of ’60 fires’ that you can name your bid alongside?