Newspaper sales are in decline.

The UK’s 11 major national daily newspapers have seen their circulation shrink an average 5.75% in the last year to 10.3 million copies a day, according to industry figures.

By size of readership, broadsheet The Independent feels most at risk. Smart phones and freesheets might be slashing bought volumes, but they feel there remains a gap in the market.

Depending on your side of the coin, it’s either the last desperate throw of the dice or inspired innovation to show the way ahead. The new paper aims for ‘shorter articles and a more populist appeal’. 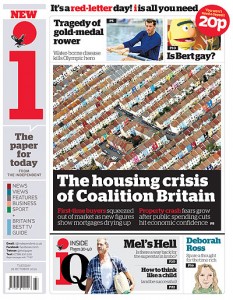 Its price-point posture is also interesting. At 20 pence a copy, the “indy-lite” makes its statement against the £1 a time competition, including its own elder sibling.

At least one seasoned industry insider believes it can succeed by emulating the Chicago Tribune’s Red Eye, trailblazed nine years ago.

Here’s owner’s son and publisher Chairman Evgeny Lebedev pitching where it fits in.

Can you sense the positioning? Put to one side for a moment whether you share the publisher’s enthusiasm or not, and consider if this pitch gets across where they want to be?

In terms of tips for new b2b offerings, I think it selects the pair of one-time opposites that it seeks to marry fairly well and doesn’t forget the kicker of the lower price. Both are facets which are readily adaptable to your latest product launch.