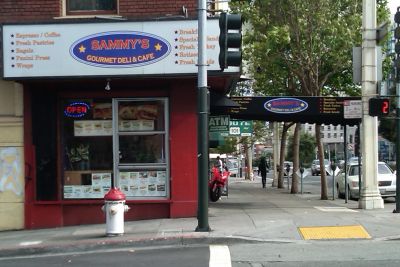 Or as a presidential candidate’s new app released last week called it, Amercia.

It’s been a while since last in San Francisco, but boy, have things changed. The omnipresent poverty on every street corner is almost overwhelming. Every roadside dustbin has someone rifling through it. Every doorway, a homeless person taking shelter. Each pavement is covered in the detritus of modern life, never a street sweeper in sight. It wasn’t like this last time.

The pic above is from outside a branch of my new favourite coffee shop, Peet’s. Mainly for their outrageous Raspberry Mocha. It’s just around the corner from ever bustling Polk Street, pretty much alongside downtown.

It is a deli, yes. But not just any old, ordinary deli. Oh no. For this is a Gourmet Deli.

Then you go in, lips-a-salivating.

Once inside though, the furthest thought from your mind is ‘gourmet’.

Yet this deli is not alone. Practically every single sandwich shop in the city has inserted the word ‘gourmet’ as a prefix to its title.

The deli’s I found which were really gourmet, they never had that word on display. And the ones that did? Well, looks can be deceptive but I felt compelled to eat elsewhere.

Years ago I sat through a presentation at an internal rah-rah all about how the company was the ’boutique’ offer in the marketplace. Yet any semblance of true ’boutiquity’ was totally absent.

If what you are selling claims to be a ‘lo-cost’, or ‘premium’ offering, then make sure you can show how.