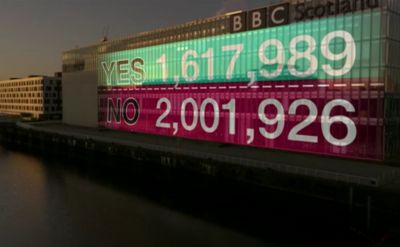 So. The Scots decided. The Kingdom remains United. By 5 to 4.

In the frenzied final fortnight, one poll during the penultimate weekend thrust the campaign into chaos. It was the only one ever to award ‘Yes’ a lead (the slimmest possible, 51-49). We now know that was a rogue poll. Hardly surprising given the many years of its founder’s poor Newsnight tv psephology?

The survey’s findings led to the giddy sight and sound of collective media commentator hyperactive meltdown.

The Big Mo was now with the Independence movement. This phrase occurred a number of times.

The Big Mo. As in Momentum.

All agreed this was a vital factor in eventual success. And it had shifted. Big time.

When the final scores came in, the irony was that the result was eerily similar to polls conducted a year in advance. Only a couple of points in it, in fact. Remarkable given the mass coverage Yes received where beforehand they’d got precisely zero airtime.

So The Big Mo gave them nothing?

What does The Big Mo give you on a bid?

More people are talking about you.

Those that are talking about you feature the real movers and shakers. Opinion makers. Glory takers.

More people are talking about tomorrow with you.

Discussion subtly moves from the ‘decision’ to the ‘delivery’.

More people are putting in place plans and resources.

Both ‘post-sale’ teams spend lots of time together, smaller yet decisive contributory decisions are discreetly made, action is being readied.

More people progress at your pace.

There’s less a ‘big bang’. The speed may not necessarily show a smooth trajectory, yet it is regular and continual and it is forward and on your terms.

If this is indeed what The Big Mo is (and which tends to be so critical) then how do you achieve it?

In the context of Scotland Decides I’ll look at this question in tomorrow’s post. For the meantime, it’s important to recognise when it kicks in, nurture it, don’t get complacent about it, and keep it moving.