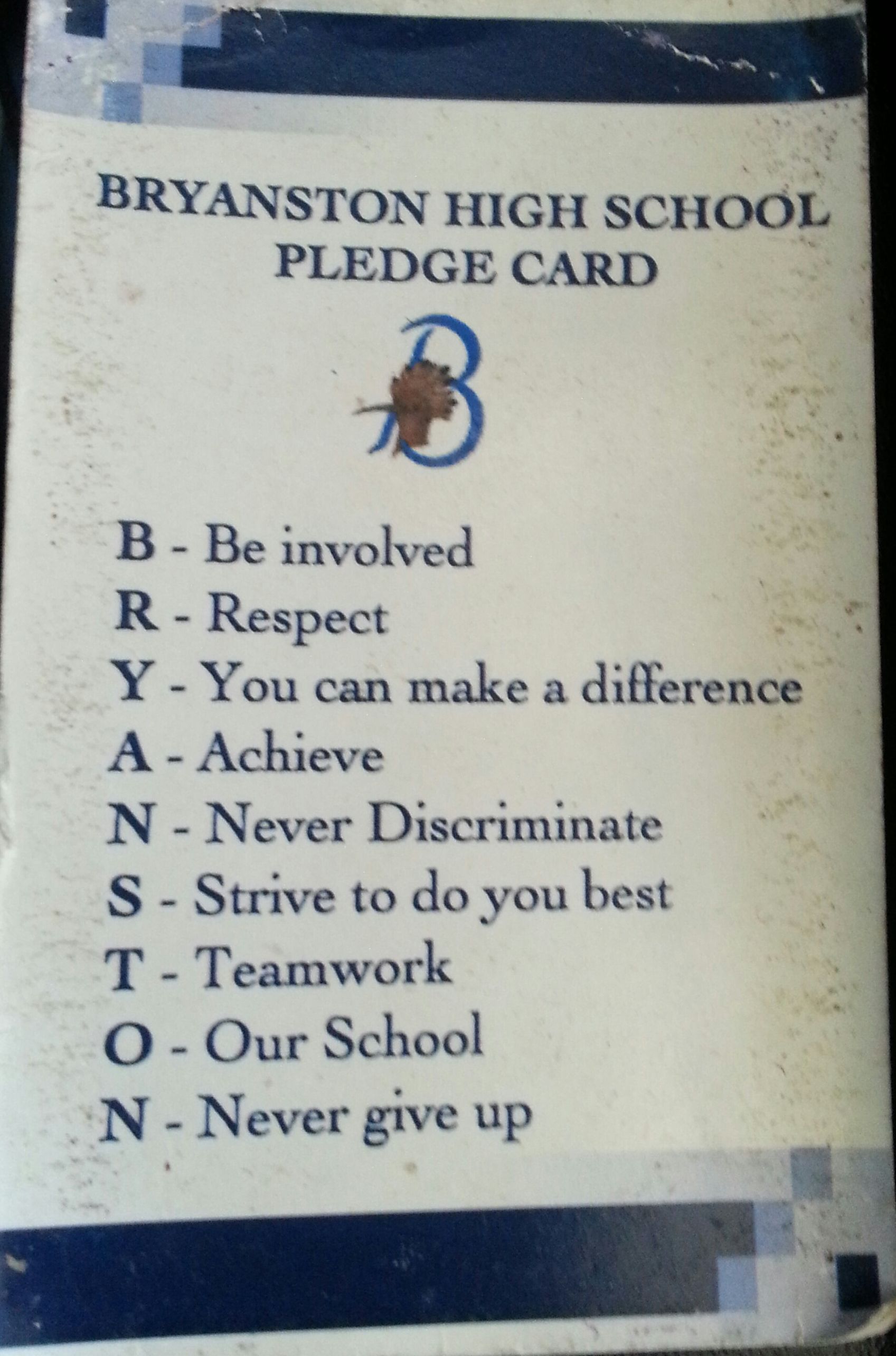 A delightfully well mannered Grade 8 African lad sat next to me on a flight, travelling from his home town of Joburg to Cape Town recently.

Trying to put him right on his choice of football team (Man City, I ask you…) our conversation began, at his behest, on the joys of, as he unfortunately termed it, soccer.

A promising ring-winger, he then began taking his phone apart to perform what I can only describe as a ‘deep clean’.

Completely hidden from view, sandwiched inside the protecting cover and the back of his Blackberry, was the above pictured pledge card.

I asked him why this was so. He answered that his teachers say they must have it to hand at all times.

A cheeky and neat solution.

It struck me straight away how this very same treatment is given to practically any corporate ivory tower generated initiative along similar lines. Those ‘shared value’ summaries also get ‘hidden from view’.

A friend of mine that amazingly actually went to the very school way back in the day, told me that the bird in the logo was a local one called a hoopoe. I did wonder why it’s looking backwards, anyway…

Then the youngster said something interesting.

Despite the clear disdain for display, he actually thought the pledges were good. He’d bought into them in principle.

I’ve blogged on pledges and pledge cards in selling a few times (here’s just one example from way back in 2007).

My experience is firmly that salesteams do not as an organism buy into any type of this kind of ‘soft’ modelling.

I once worked with a large tech salesteam (around 50 strong all told) as they got mandated to attend one of a number of sessions. Run by an outside ‘branding’ agency, the idea was to come up with the values and ambitions of the company overall.

I witnessed the results trumpeted at a New York conference. Everyone duly applauded. Two days later the team were gently asked to repeat the messages. Not a single soul could. I was the only one that could recite the core vision statement. And I didn’t even work for them.

More recently, I worked alongside the leadership team of a global colossus. Their name is one word of seven letters. Two of which are the same. This presented an opportunity to create similar messaging. They could fairly easily isolate seven key, core values. And it wouldn’t be such a stretch to assign each one a word or short phrase beginning with the requisite letter. Making a simple acronym.

Yet you could argue, what’s the point? Sales teams the world over would mainly be the same, right? They’d never take any real notice of such stuff. They’d universally regard it as trivial fluff, irrelevant distraction, an intrusion on ‘proper’ selling. No matter how much ‘involvement’ they had, yes?

Yet there’s something about this kind of thing I do really like.

So perhaps it is worth persevering with?

So long as you make each word/phrase relate from the client’s perspective, why not take a brand mane in your stable. Come up with a few constructs that set you apart. And riff away by yourself. If nothing else, you’d be able to create a decent slide that says why you feel customers buy from you, and stay happy…