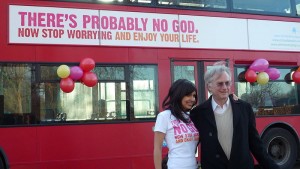 I spent a couple of hours “chillaxing” with one of those new fangled tablet touchie things over the bank holiday weekend. It’s amazing how flicking through youtube can remorselessly eat through time, isn’t it?

I landed up watching several clips of self-styled militant atheist and leading evolutionary biologist Richard Dawkins. And highly entertaining it all was too.

He reserves particular animus for his foe de jour, the so called “young earth creationists”. They believe the earth is 10,000 years old. And that’s a true fact.

He was sensitive to accusations that he was no longer debating face-to-face with their kind.

This left him exasperated as he couldn’t abide giving them the equal footing that a shared platform would suggest.

So he’d develop a line to reinforce his view that the crackpots shouldn’t be let out their padded cells anywhere near him;

A frightening 40% of U.S. adults think the world is only 10,000 years old.
When of course it is really 4.7 billion years old.
That’s just like them saying that North America is only 8 yards wide.

He goes on to draw analogies of him holding a debate with a young earth creationist with these posers;

Would a geographer have a debate with a flat-earther?

Would a reproductive scientist share a platform with a stork-theorist?

This kind of imbalance appears in solution sales too. Especially when you’re the higher-priced option and the cheaper, less functionally rich vendors try and raise their credibility by sneaking onto your pedestal.

None of us like disparaging the competition. (I steadfastly try to avoid talking about them altogether). And to be seen as belittling cut-price alternatives tends to alienate your prospect. So without quite going as far as Dawkins does, what analogy can you create that leaves your marketplace in no doubt as to you alone being on top of the podium?

You can workshop this yourself by writing down the most oft-heard jibes competitors make. Then think how ridiculous these would sound in as many separate, everyday contexts as you can.