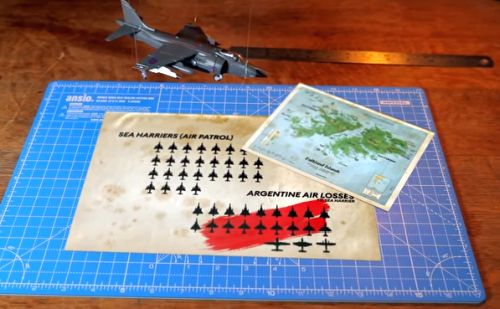 This is the refrain longtime furrow-browed sellers pass on to wide-eyed newbies.

It bounces off the quality misnomer. The highest in ‘quality’ not being the Gucci, Rolls-Royce or Macallan. It has nothing to do with pricetag or perceived luxury. The true mark of quality is the degree to which something is ‘fit for purpose’.

It is the best-fit product which wins.

A recent account of the 1982 South Atlantic air war over The Falklands gives yet another terrific example of this.

Via author of the book Harrier 809: Britain’s Legendary Jump Jet and the Untold Story of the Falklands War promo tour. [Including this 48min podcast of aviation historian and main commanding officer protagonist.]

They outnumbered the British in the sky by a massive ten to one. 200 plays 20.

Particularly their Skyhawk and Mirage planes were not vulnerable on aircraft carriers, rather safely parked in airbase hangars when idle.

And yet they got trounced in the skies.

Not a single British plane lost in air-to-air combat.

Only weather, accident or ground fire could account for loss.

The inferior spec triumphed. Spectacularly. How so?

Maybe it was the training.

Or technology. Like ability to fly ten feet above the ocean surface or smaller yet cleverer Sidewinder missiles update (the Nine Lima, nicknamed the deathray) on board as well as its total reliability.

Rotating nozzles could direct power of the jet engine. In flight you could change direction at extraordinary rate. Making it a devilish opponent, even beating the vaunted American F-16 in training manoeuvres.

As well as being able to fly outside the normal limits of fixed winged aircraft in the stormy conditions of the South Atlantic.

Features and functionality discounted at the start, made the vital difference when battle margins for error were extremely narrow.

And so it can be on a competitive bid.

Focus on how close you can get to unleashing what the buyer wants.

You may well have a capability somewhere which is unique too.

Enlarging a gap between you and alternatives. Bringing the buyer closer to what they want to do.

Can the faster, stronger and more populous be beaten by your agile, cleverer and better suited wares?