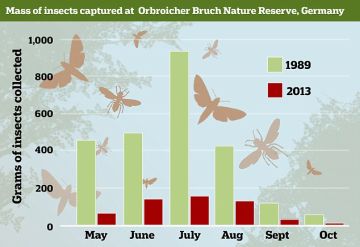 How’s this for a mainstream media headline;

Where have all our bugs gone? The flying insects the planet depends on plummet by three-quarters sparking fears of ecological armageddon

The story goes that worldwide, drivers got to wonder why after long drives, “far less effort is spent scraping off the distended corpses of the multiple airborne pests that used to weld themselves to the car’s windscreen”.

The resulting investigation discovers that insects, which constitute two-thirds of animal life on earth, are decimated by a frightening 75pc over the past three decades. (An alternative graphic treatment can be found at the foot.)

Mankind is the clear frontrunner to blame. Due mainly to a recently deployed type of pesticide. One which seems to hammer insects previously happily pollinating our crops. Also with potential to have an effect on our own bodies that would make Big Tobacco or Big Oil the Pure, White & Deadly sugar barons look like amateurs who merely tinkered around the edges at irreparably harming our species’ health.

This has a glaring solution sale angle.

Just as a problem so potentially vast and destructive as the disappearance of insects can be first spotted with something as small and difficult to see as clear windscreens (doesn’t windshield just sound wrong?), then is the earliest warning sign of bigger trouble to come in one of your prospect work processes similarly (ahem) shielded from view?

What are the disaster movie staples that signify doom? The trickle of droplets from a ceiling? The slight judder of plane componentry? The strange whiff on an unusual breeze?

And many more besides. Symptoms that may go completely unnoticed by most, if not all, whom they afflict. Do you know those for your niche?

The absence of bugs on a car is one great metaphor to add to age-old examples of the first alarm bell like “canary in the mine” to isolate if that which shows your services will be sorely needed is in fact, now in play. 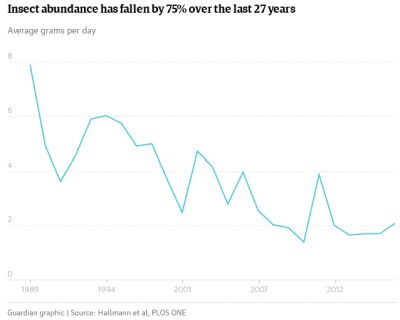