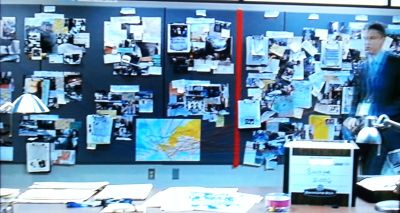 Another CIA visual timeline. Albeit caught quickly in front of the telly.

I blogged in 2012 on how Homeland’s Carrie obsessed with her enemy within by way of a lovely pinboard. More recently I came across something similar from Idris Elba’s Luther.

So over the festive break I watched the 2011 Richard Gere spy flick, The Double.

And would you believe it, Hollywood have the young buck CIA operative using the same device.

He’s looking at what he believes is an assassin’s career kills to try and deduce his identity.

Again, his has columns for each year.

Rather than the neat extra dimension of Carrie’s colour coding, he employs a rather natty further level of his own.

There’s string tied round the tacks to link all similar locations across the piece.

And by way of reminder, there’s a big red stripe down the middle. This reminds him of when a change in pattern occurred.

As I’ve said before, I love visualisations. And ones like this are actually not all that difficult to do.

Especially if you’re working a large, complex bid, then you’ll have all the info you need on file physically, or can easily print out the odd email, doc or pic.

When the inevitable time comes that you ‘host’ those all-morning deal reviews – the ones where all and sundry are wheeled in to tell you how you should be really running your deal – to prepare your room with this kind of prop is an absolute winner.

A couple of notes.

I’m constantly amazed at how salesfloors are so drab. I’m not necessarily talking about just how your cubicle looks (as I’ve done recently as inspired by a musician). It’s not that the walls are bare. It’s what’s on them. All corporate banalities, straight from central values and visions in awkward HQ non-English, and bland marketing quotes from customers who could be talking about any old thang, let alone how we change the world.

Yes, some small amount of these can be worthy, but where’s the ownership and sparkle of the salesteam? Where’s there on show anything that displays how we are – or should be – doing our job?

There’s no reason why you can’t claim (reclaim?) a part of wall real estate and have this kind of thing up and running for your deal of choice. You could even take it further and plot all your deals by way of what’s gone on compared to your sales process…

As for glossy pictures, they’re simple to have. You just need to get into the habit. In the early 90s my hardy bunch of mates all bought a funkily palm sized Olympus camera. We each took them on our numerous and regular nights out.

This was a decade before your phone had its lens. Yet I got used to having the small unit in my pocket. And I got to taking pics of prospects. It started when I took photos inside customers’ operations (with their permission of course) for the reason of using them for my own future sales presentations. Then with prospects, I was always allowed to snap away as I wanted to enliven my documentation to them. I guess if they’d have denied access, then that would have been quite a qualifier.

I even have an anecdote where ten years ago I got locked in a safe room by the security of a sensitive American plant in Scotland whilst taking piccies around their place. When my customer realised the misunderstanding they wanted to play a practical joke on me to prolong my incarceration. (Thanks, Danny).

Anyway, we all have cameras in our pocket so get into the simple habit of taking the odd pic. Remember to ask first, mind, and stress that you don’t want to photograph anything sensitive, merely be able to improve how your docs look for them.

If it works for the CIA to catch a spy, it can definitely work for us winning that deal. 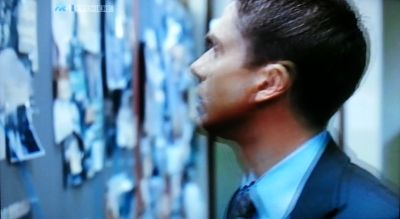 …& I also recently saw that the FBI do this too. Well, according to Hollywood at any rate. This time, from 2011’s Columbiana. Here, the agent is contemplating his 22-time “Tag Killer” of baddies, about to be re-named after the flower, Cataleya. You can just about make out an outline/tracing of its delightful shape bottom-corner of the noticeboard. I suspect the red notes apply to each victim. 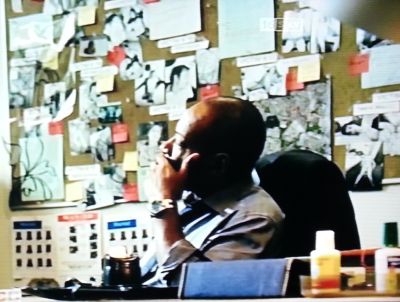