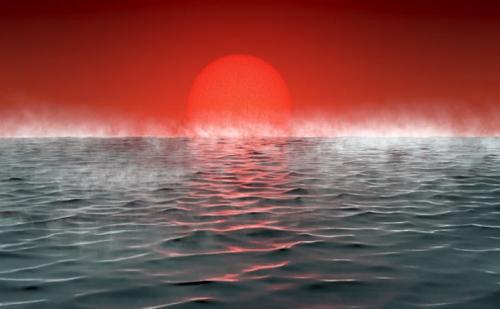 Yikes. That feeling you get when science comes along to ruin your carefully cultivated theory.

If life is to exist elsewhere in the universe, the prevailing wisdom is to need water and sit in the habitable orbit neither too far nor too near a sun.

Since the first exoplanet beyond our solar system was found back in 1992, four thousand more have been discovered. So far, it’s thought as many as thirty may harbour conditions for life like our Earth.

Promising? If not for little green men, then maybe micro green algae.

Now we have this academic headline ‘boom’;

“A new class of exoplanet very different to our own, but which could support life, has been identified by astronomers, which could greatly accelerate the search for life outside our Solar System.”

As the label suggests, hycean describes a place where aquatic oceans like ours swell below skies that, unlike ours, are hydrogen-rich.

I have steadfastly urged salesteams to focus on where there client life most likely resides. With a whole range of demo- and psycho-graphics to understand. Along with adapting sadly under-utilised AIOs (Activities, Interests & Opinions; sometimes with alternate ordering notation IAO). Producing a true ideal prospect profile.

You must laser-in on this. Ruthlessly discard any that fall outside it. No matter how emotive their pull.

Yet now we learn life might spring in previously written off darker corners. In similar fashion to this finding potentially re-writing cosmos biology, is it really back to the drawing board for both extra-terrestrial searching and homebound selling?

The Goldilocks Zone is still the number one target.

Yet now do we have the emergence of a plausible outlier?

From clients one evolutionary cycle removed from the optimal, proven norm.

What I like about this concept, is that rather than give licence for any old bizarre hunch to be tolerated as a drain on selling energy, a certain set of specific, defined characteristics – that crucially do not fit the accepted profile – can be entertained.

Whilst many seat-of-pant-ers may howl that even this stays too prescriptive or restrictive, at least it shows that you, as a sales endeavour, have considered deals both slightly out of the ordinary and which may well stay true to your treasured process.

Are your primarily preferred prospects alone?

Or does a different path lead to a cluster of potential customers beyond alternative horizons?

My suspicion is that such a separate source will, in similar manner to the hyceans, exhibit one particular trait in overwhelming force that sways the day our way.

It could revolve around the support of a specific role-holder. It could spark due to a precise moment reached in a cycle. Or it could be solely to do with the draw of a singular ‘feature’ suddenly super-attractive to a buyer with a live, burning hot, issue.

You could even model where such left-field life may be (a number of matrices could be drawn up to help). Open the idea up to your colleagues. Ask your current customers.

Wherever it is, if you are to allow deviation from that narrowed qualification which will undoubtedly unleash greater success the more refined it is made, then I feel it must be made explicit from the off.

I guess everyone’s permitted to follow a gut-feel once in a while. But thinking in this hyceanic way I suggest gives you best chance not to lose yourself down the wormhole towards an inescapable black hole bringing the travesty of wasted time.