On a talk radio show Monday I caught a discussion on the merits or otherwise of a particular piece of technology.

It was the world’s first lab-grown meat. To be cooked and eaten as a burger patty later that day, live in London. The Dutch team’s development from cow stem cells was apparently funded by a Google founder to the tune of £215,000.

The next day’s best headline was this frontpage splash on tabloid The Sun. 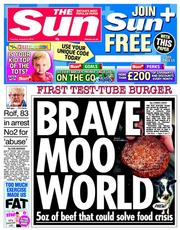 The anti argument was basically that it doesn’t work, it’ll never work, why bother, today or tomorrow. And of course, what a waste of money, it’s too expensive, isn’t it.

Then the chap in the pro camp came up with this retort;

Notwithstanding the fact that the Wright Bros were not the first to fly (I go with the French and their Clement Ader) it’s obvious that there’s surely never been an invention or piece of human progress that was born fully formed.

Everything needs development. An evolution.

So yes, you may be less than perfect right now, but come on. When is it ever perfect? There’s always room for further endeavour and refinement. Nothing is ever ‘finished’.

There’s plenty other similar examples, particularly from the world of tech for sure. I’ll certainly deploy this plane quote.

Especially when a prospect expects something that doesn’t yet exist. It’s a gentle nudge to remind them that it’s best to make a start on what’s available now.