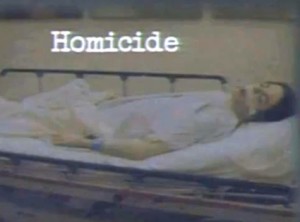 It’s not often that a powerpoint presentation makes the front page of just about every news website on the planet.

This week, courtesy of the prosecution team on behalf of Michael Jackson, that’s precisely what happened.

As surely the whole world knows, his doctor pleads not guilty to the charge of involuntary manslaughter.

In the aftermath of the opening arguments, the visuals used by “the people” beamed around the globe.

It was the kind of slideshow that feels to me expensively put together. Mainly because the expectation is meant to be set that it isn’t. Now, I’ve not delved too deep into the templates on offer in the latest Microsoft release, but the green background, with that almost haphazard tonally darkened border, gives the impression of design inattentiveness that really says instead, design attention to detail.

For instance, it’s almost as if they’d heeded research that found the background colour green, and this particular hue, is more likely to lead to a conviction. I’m not saying that this deck was crafted by highly paid professional presenters, but it does smack a touch of being the product of such input. Even down to the white, courier, skewiff font used for the text. I mean, come on. Who uses courier? From another piece of research suggesting the ‘right’ verdict follows, perhaps?

So what about the slides that are plastered all over the web?

The stand-out is obviously the one with Jackson’s corpse. A gift for any picture editor. The front of any presentation should be a killer (no pun intended) slide. I don’t know if this was the first, but it does indeed pound an incredible impact. Here it is with it’s “cause of death” strapline factoid. 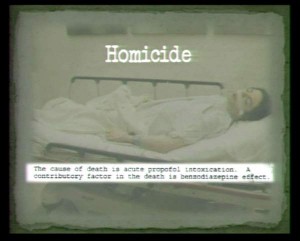 There were two with images of vials. One with 20 (pictured) one with 40. This kind of representation is a cracking way to show the volume or sheer scale of anything. Especially if there’s two like in this case that show an acceleration or increase. 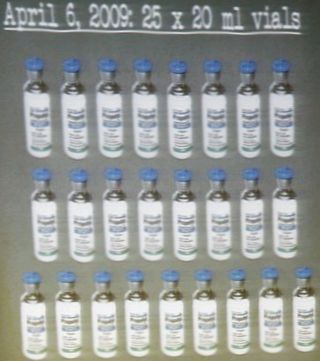 And also of note is this one. I guess it represents the alleged murder weapon. 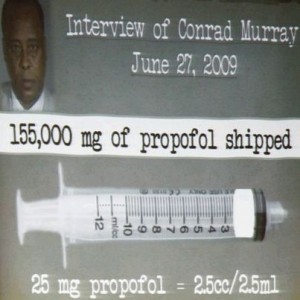 I’m quite surprised there hasn’t been any spoof internet mash-ups of these slides. Either side could easily take the format and plaster in a big higgledy white courier typed ‘innocent’ or ‘guilty’ for instance.

Then there’s the corporate icon, or constant theme, thankfully missing. Imagine a halo-bearing smiling accused in each corner or, heaven forbid in the land of executions, a noose.

Even though these slides seem positioned to look amateurish, and therefore believable, trustworthy even, as opposed to snazzy, aspirational and thereby manipulative, they are in my opinion a professional piece work. One fully aware of its goals.

How do your latest slidedecks match up?