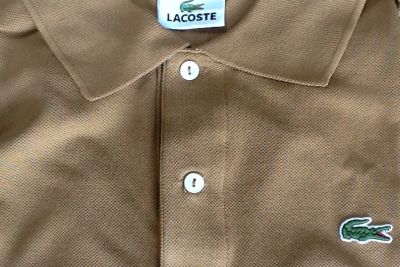 Actually, fashion retail giant Lacoste may have a sales process. This week Summer news silly season continues with a story about a New York chap moaning about his town’s cost of living. (As read in Gothamist & The Daily Mail).

Wade Groom posted his paycheck online then employer Lacoste sacked him as a result. Goodbye to his $15/hr basic job, “making as much as $1,500 a week selling shirts” from 3% commission. Even though just three months in, he was their number one salesman (in the entire country – proving process propels proceeds).

As revealed in praise received he also posted.

What a shame the interweb couldn’t turn up more about these.

The Lacoste acronym. Does that refer to the values that the brand represents do you think?

The Rules of the Game. Does this allude to the process you go through with a browser?

Whatever these mean, the fact is inescapable that they have something formulised going on here. Which strikes me as strange. For the top pictured above is of my own Lacoste golf shirt. Bought from an English Lacoste store.

Yet no-one talked to me when inside. The only interaction was when I enquired of the young lady at the till if she thought I’d chosen a decent colour (as should I feel – being a wannabe Joan Ranger – that a gentleman’s wardrobe is best bereft of brown?). At least she made out it was a winner. One of her favourites, in fact. And it works as both smart and casual. Amazing. She tells all the men the same thing, right?! (Maybe it’s only an American thang?)

Anyway. If you don’t have an acronym, nor a version of Rules of the Game (a touch naff, that name mind), you are doing something wrong. Missing a significant trick. Every single sales endeavour is massively boosted and given sustainable longevity when even an attempt at formulisation takes place.