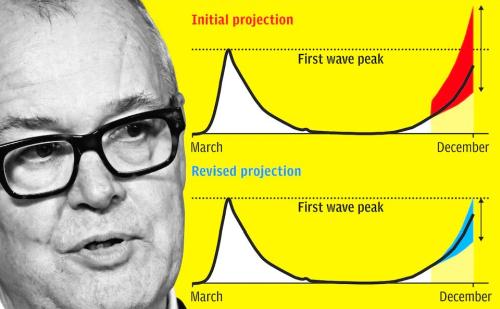 Another lockdown, another fake stat.

Only this time, ‘wrong’ predictions which plunge a country into their needless #lockdown2.

The kicker is, that imminent death guesses were reduced. By quite the chunk. From 1500 a day to 1000. The original therefore being a whopping FIFTY PERCENT out. Also meaning – psychologically vital – that at this amended level, they are now below the April fatalities coronavirus peak.

As widely reported by UK media not in thrall to lockdownomics;

The revelation prompted former Prime Minister Theresa May to question the Government’s use of statistics and ask whether “figures are chosen to support the policy rather than the policy being based on the figures”.

Rendering the second lockdown imposed on the strength of those earlier forecasts agreed to on extremely flimsy ground. The evidence being labelled the ‘dodgy dossier’, in homage to how Britain was taken into war in Iraq under false pretence in 2003, with incorrect claims of stockpiled WMD.

The quietly released adjustment came with this official wording;

“Plots on slides 4 and 5 have been amended after an error was found in the interquartile ranges for SPI-M [Sage’s Scientific Pandemic Influenza Group on Modelling] medium term projections.”

Simple English also proving a problem for the data shifters.

Clearly we must avoid similar catastrophe with our figures used to justify a sale.

What this above graphic (from London’s Telegraph designers) also shows, is a great slide template for a before and after chart.

The bold yellow background seems in stark contrast to their normal graphs and palette.

The yardstick line is clear.

Not forgetting the black and white face of the chief scientist whose “bogus modelling” was “riddled with errors”.

A format that our slides could readily replicate. Even if changing colours to suit your prospect, and also swapping out a personal mugshot to a physical monochrome product or singular situation shot.