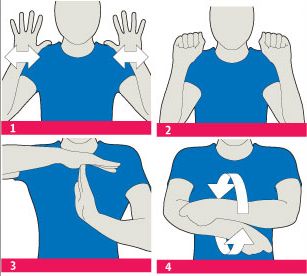 Here’s something interesting to try at your next meeting. Provided you know the protagonists well.

Not only would it be likely to provide a bit of sparkle, it may also encourage more open participation.

I’ve a sneaky feeling that for internal bid or ‘strategy’ discussions, it could prove a telling deployment.

Yes, it is perhaps a bit ‘novelty’, but you never know it might just work both lighten and speed up a particular forum.

The above linked Guardian article suggest these signals pictured represent:

This phenomenon seems to have arisen out of a movement towards consensus decision making. It even has its own wikipedia section, with more hand signals to utilise. So, next time you chair a meet, why not get your colleagues to “twinkle”?

agreement – “twinkling” fingers of raised hands, aka “silent applause” – &
block or strong disagreement – raising a fist or crossing both forearms with hands in fists
comment relevant to point just made – raise both forefingers

the “Fist-to-Five” or “Fist-of-Five”, each member of the group can hold up;
– a fist to indicate blocking consensus,
– one finger to suggest changes (apparently allowing the chair to do “stacking” of future contributors),
– two fingers to discuss minor issues,
– three fingers to indicate willingness to let issue pass without further discussion,
– four fingers to affirm the decision as a good idea, and
– five fingers to volunteer to take a lead in implementing the decision.

“straw polls” using the “Thumbs” method, where;
– Thumbs Up = agreement;
– Thumbs Sideways = have concerns but won’t block consensus; and
– Thumbs Down = I don’t agree and I won’t accept this proposal.