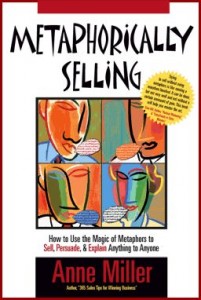 I’ve listened to American Anne Miller discuss her book and read her blogs. Having done so, I’m surprised she kept to such a technical and even exclusionist title. A number of alternatives occurred to me taking her own medicine (see what I did there) right away;

That last one is from her own words. Although ending each as she does, with the term selling, the focus is rather on specific sales skills such as pitching and explaining rather than a soup to nuts (I couldn’t help myself) sitting. Nevertheless, there is an excellent central idea here.

Want to lock in your message? Need to grab attention more? Then a metaphor’s yer man. Here’s her formula;

Information + Metaphor = I can see what you mean

As a grammatical point, she doesn’t restrict herself to just metaphors. Similes and analogies also count. As probably do allegories and fables. Anything that helps the prospect ‘get’ a comparison that’s both memorable and visual is good. As she quotes Einstein;

Her explanation of why you need to deploy this tactic is excellent (even if slightly out of kilter with the progression of today’s leading brain scientists such as Susan Greenfield – with her content (‘meaning’) versus process (‘pleasure’) battles – and Iain McGilchrist – and his narrow focus, big picture dilemma). It goes like this.

The left brain processes data, facts and numbers. The right brain, images, feelings, emotions, colour. Most people sell using features and benefits, facts and figures. This means that the essential right side goes ignored. Unsold. A metaphor makes you unique because it crucially helps people see things right away.

As for examples, even though hers aren’t what I’d consider brilliant, they do indeed open your eyes. Addressing the left-right brain difference, she mentions that you could simply stop at “300,000 people die each year from cigarettes”. Or you could continue, “which is equivalent to two jumbo jets crashing every day”.

The construct you should force yourself into the habit of using is also good;

Although her favourite metaphor doesn’t quite chime with me, it does explain the process. When trying to penetrate a prospect happy with their current supplier, she asks, “do you play tennis?” The incumbent supply is like having a good forehand, but no backhand. You can do well with just that. But to excel you could do with a backhand. And I’m that backhand.

I was party to a metaphor many years ago about Mike Tyson. A load of Americans loved using it. The competition were always saying that their next upgrade would have all the features then lacking. Their clients were prone to believe them. Time and again, though, they failed to materialise. It was a “not taken to market yet” scenario.

The stateside response was to say it was like being the best heavyweight boxer around. Knockers always attacked by saying Tyson’s the best. Yet he was in prison at the time. How can you fight someone when they’re incarcerated? When he eventually came out of course, he was no longer the best. The yanks loved it, but there was a flaw or two really.

Anyway, I had a favourite metaphor of my own back in the Nineties. It helped me win an awesome amount of business when selling a particular ‘plug and play’ or ‘off-the-shelf’ solution. Inferior but established competition was pitched as more functionally rich. It came unassembled, as a toolkit, one where you had to create it all for yourself but where the final results were, allegedly, infinite. Rather than sell on price, one routine in this case I used asked variations on, “when did you last buy a washing machine?” (Other brown goods, like microwave or coffee machine, also worked).